You are at:Home»Pets»The World’s Most Famous Dogs

There was a song I sang in choir in junior high. It’s forever ingrained into my brain, and it was called It’s Ruff Being a Dog. It was definitely a cutesy song, and one of the most memorable lines was talking about the most famous dogs and it went like this:

“We must respect our puppy pals, those fine four-footed hounds

who fought the fight for doggy rights to keep us from the pound.

Like Snoopy and Lassie and Rin Tin Tin and Huckleberry Hound

A dog is man’s best friend…”

Interestingly enough, if you try to search for some of the most famous dogs in history, Lassie and Snoopy don’t even come up. However, there are more German Shepherds listed among the world’s most famous dogs than any other breed! It’s no wonder, either, when you consider what intelligent, loyal, and gentle dogs the German Shepherd is. Here are some of the most famous and noteworthy dogs in history. It should come as no surprise they are ALL GSDs. 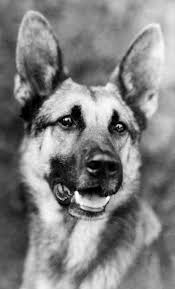 This German Shepherd is one of the first to win the hearts of Americans. The male German Shepherd was trained as a police dog in Berlin and then served in the German Red Cross during WWI. The dog was sent to the United States in 1920, where he was spotted by film producer, Laurence Trimble at a dog show in White Plains, New York. Strongheart starred in several movies in the 1920’s, including White Fang in 1925. He also had a brand of dog food named after him that was produced all the way until 2002. Good lookin’ fella, isn’t he? He even has a star on the Hollywood Walk of Fame! 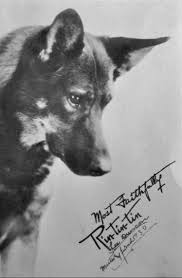 We can’t talk about famous dogs without bringing up Rin Tin Tin (besides in some cheesy song lyrics). When we talk about superstar dogs that are Hollywood royalty, Rin Tin Tin is the cream of the crop. This pup was found by an American Soldier, Lee Duncan, on a battlefield in WWI. Though Strongheart preceded Rin Tin Tin, it is this dog that is credited with greatly increasing the popularity of German Shepherd Dogs in the United States. Rin Tin Tin starred in a whopping 27 movies. He also inspired the 1950’s children’s television show, The Adventures of Rin Tin Tin. This handsome beast also has a star on the Hollywood Walk of Fame. 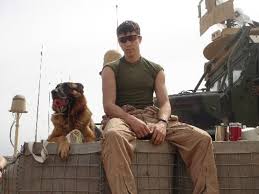 This hero dog was the first fully fit, active duty military dog to be granted early retirement to be adopted. Lex’s handler, Marine Corps Corporal Dustin J. Lee was killed in an attack which wounded Lex. In 2007, Lex was retired from active duty and adopted by Corporal Lee’s family and shortly afterward was awarded an Honorary Purple Heart. This decorated dog died in 2012 of cancer. And now my eyeballs are spontaneously leaking. 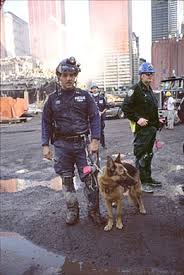 Another hero dog here. Are you sensing a theme here? Apollo was the first search and rescue dog to arrive at the World Trade Center after the September 11 attacks. Part of the NYPD Canine Division, this amazing dog risked his life and was almost killed by flames and falling debris.  And yet he continued to work after his near-death experience. Apollo’s handler, Peter Davis, brushed the debris off of Apollo, and he continued with his tireless efforts and the task at hand. Afterward, Apollo was awarded the Dickin Medal, which is the animal’s equivalent of the Victoria Cross. 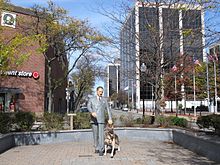 Buddy was the first seeing eye dog in America, and the cornerstone of the first ever guide dog training school on U.S. soil. Maurice Frank had heard about the guide dogs being trained in Switzerland by an American Breeder. Having lost his sight in two separate incidents when he was younger, he wrote to Eustis saying he had to have one of those dogs. He wanted to show the world that being blind didn’t mean being completely dependent and set out to introduce guide dogs to the U.S. In 1929, the Seeing Eye was incorporated in Nashville and was the country’s first ever school to train guide dogs for the blind. Buddy, the female GSD guide dog of Maurice Frank, set a precedent for service dogs in the United States.

Mittelwest German Sheperds knows just how amazing these dogs can be. They aren’t just amazing family companions, they are service dogs, working dogs, heroes, snugglers, snorers, actors, and best friends. Out of all of the stars on the Hollywood walk of fame, three of them belong to dogs. Of those three, two are German Shepherds! Is there anything a GSD can’t do?

This is an amazing list! I have also a bulldog and me really care about this last week I complete his vaccination and also get 15% Off Pet Care Supplies Coupon Code

Very Nice Listed! I Love dogs. Recently i did complete my bulldog vaccination & got 72% Off pet Medication offer from Couponbend.com