You are at:Home»Back to School»RoWrite is Must-Have Tech for A+ Students

I cannot BELIEVE that school is starting up already. Literally, we have thirteen days until we’re getting the kids onto the bus and packing them off to school. We just finished shopping for school clothes today. Next on the list are school supplies.

This year, my oldest is moving to a brand-new high school in the district that is just opening, and he’s very excited to be issued a computer. BUT, the computer will have limitations for use in school. It will be great for homework, but for taking notes in class we are more apt to push for the traditional pen and spiral notebook. Here’s the thing, though–we just stumbled upon the coolest freaking device ever called RoWrite. That bad boy is gonna be at the TOP of our school supply list this year. 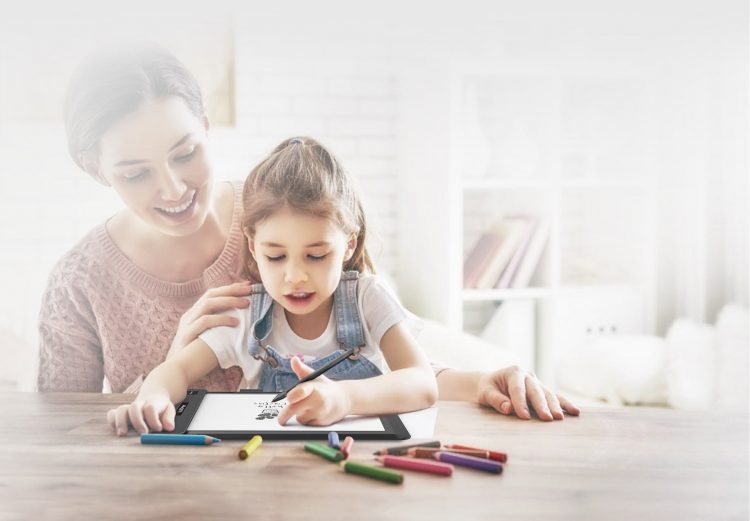 Studies have shown that the act of writing things down is more effective for recall later on. Think about it–how many times do you forget an appointment or an event or a note the second you tap it into your phone only to remember when the reminder dings later on? Now think about when you used to write that stuff down in an appointment book or go to the Way Back Machine and remember taking notes in class? Which one left a longer impression in your memory?

For me, it’s hands down the pen and paper route. And that action of putting pen to paper for better memory and recall is actually backed by research. This is where the RoWrite comes in. The device is similar in size and shape to a tablet. But do you remember those penny toys that used a sheet of clear plastic over a black magnetic thingamabob that you wrote on with a plastic pencil? It’s sort of like that. But wayyyy cooler.

Whatever you write down on the “pad” with the “pen” can be stored indefinitely. It makes it super easy to organize and track your notes, thoughts, and ideas and even share them with the touch of a button. It comes equipped with a stylus-type pen that is hyper-responsive. It doesn’t give the delay that users experience with other types of stylus-on-pen devices. It feels almost exactly like a pen writing on paper.

The pen is customizable in an app which allows users to select the width of the tip, the style of device (ball point, gel tip, fountain pen, quill and ink. Ok, maybe not all of those. But you get my drift) and even the color it “writes” in. Information can then be stored and shared in real-time so that it’s there for recall whenever you need it. It is sleek, elegant, and just so freaking cool it’s unreal. I really want one of them for myself. Alas, I have to settle for borrowing my son’s to play around with.

ENTER TO WIN YOUR OWN!

Is this giveaway worldwide? Cheers

RoWrite offers understudies an enhanced, more natural, material experience of the pen to paper as opposed to the not as much as perfect involvement of writing straightforwardly on a tablet. They can undoubtedly catch class notes, homework, portrayals, illustrations, and that’s just the beginning.

RoWrite brings the customary notebook into the advanced age. Make and catch thoughts, notes, or drawings. Alter and improve them continuously or later, when connected with a gadget with the RoWrite App.

do my assignment for me

Provide an alternate, more natural, material-experienced pen paper for alternate actors, rather than being as perfect as possible, straightforwardly written on a tablet. They will undoubtedly catch up with class notes, homework, portrayals, illustrations, and this is just the beginning.

restart my computer in windows 10

I extremely like this Writing Pad. Although I have just utilized it once at a meeting it was incredible to have my notes exchanged so I could without much of a stretch offer them with partners. I want to compose on paper instead of utilizing a stylus and screen so this framework works impeccably for me. I wish more paper accompanied it. Since the p

The RoWrite App, which is available each on the iOS App Store and also the Google Play store is wherever the ability of digital is totally realised once combined with the analog notes/drawings you’ve simply created.

How to write my assignment online

A sensor under the paper tracks where the pen is with incredible exactness and the pen itself is weight delicate. The sensor is adaptable, which assists with precision, and the pen (utilized in pencil mode, which you effectively change in the application) is fit for enrolling 2,048 weight levels, so lines seem thick, thin, substantial or light.