You are at:Home»Family»Family Tasks: task management solution for every family
66shares

Family Tasks is the story of a father of 3 and an entrepreneur, Jerome Serre. Like many families, we consider it paramount that our children participate in home chores. We share the belief that participating in home chores gives children a sense of responsibility and that it makes them value work. We started early with our children (when the eldest was 9 and the youngest 5) with a simple magnetic whiteboard on the fridge and magnets personalized with a photo of our children. 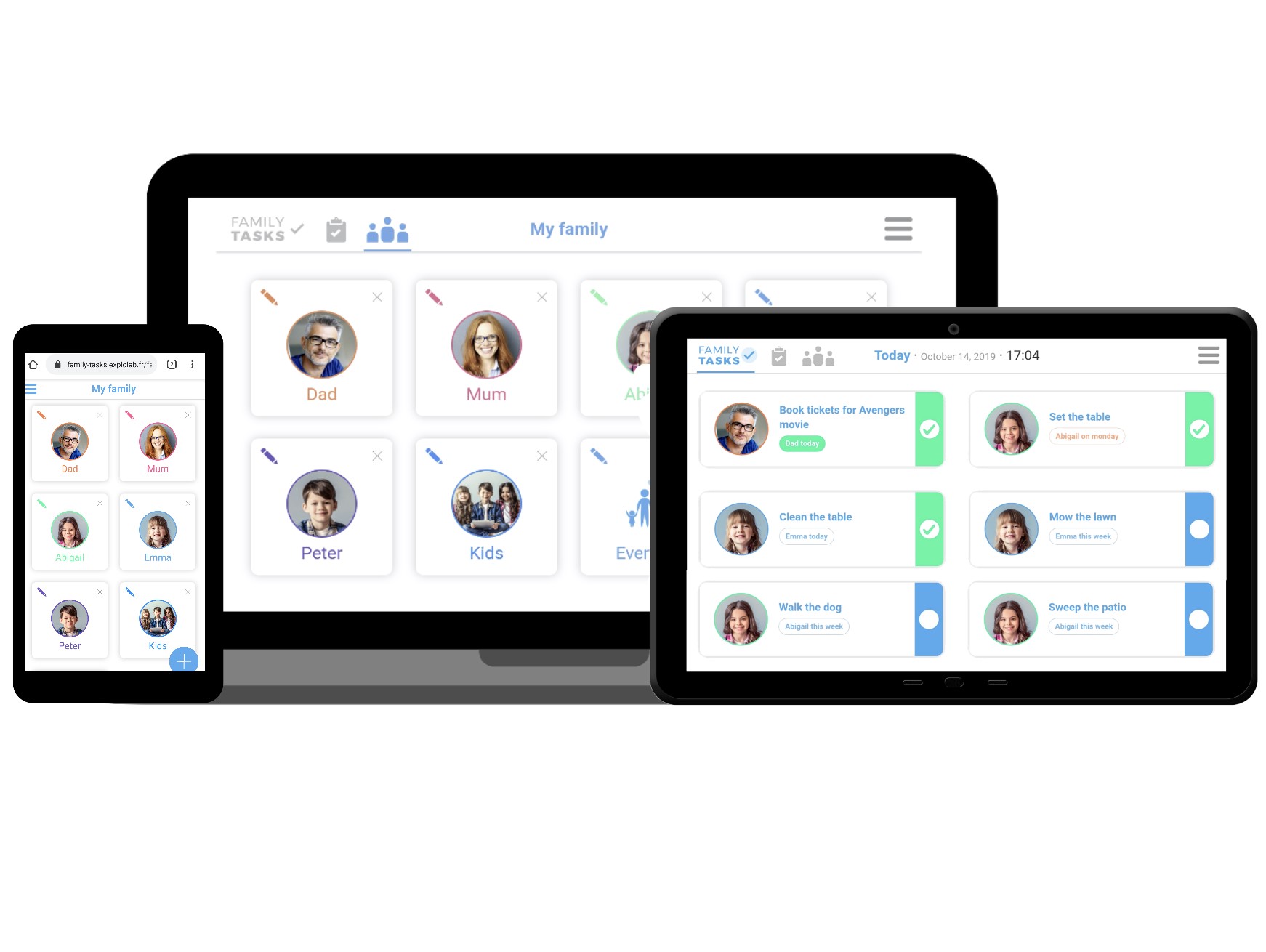 The system was a huge success, and not only did we never have an argument over chores, but we soon realized that our children were proud of the system and were bragging about it to their friends (apparently some other systems generated frustration and anger to parents and/or children). Discussing with friends, we were surprised to discover that for some parents asking their children to help in setting the table or sweeping the floor would almost always trigger an argument, and that a lot of parents had renounced asking their children to help because they felt they would spend more energy asking than doing the chore themselves.

Was our system perfect? No. In particular, as children grew up, they wanted to have the information on their phones, not to have to go to the fridge. And for some tasks, like “Buy the bread”, you really prefer to know you’re in charge before you come home, not once you’ve arrived!

From a DIY to a product

After analysing the flaws in the system we chose to digitize home chores with a super-simple task allocation and rotation web app, and to put it on a screen on the fridge so that anyone could see it at all times, even if they didn’t have a device.

The screen on the fridge became Dock Dock!, a kit which transforms any fridge into a Smart Fridge, and the web app became Family Tasks. Dock Dock! and Family Tasks can be used independently, but they really shine when used together. An Android App manages the tablet while it’s on the fridge, and displays shortcuts to apps or web apps for immediate access to most useful services… like Family Tasks.

Family Tasks is a simple task management system which covers the 3 types of tasks which exist at home: rotations, days of the week, and one-time tasks. It can be accessed on any screen, and that’s it! The whole method for choosing and allocating tasks progressively in time is detailed on the Family Tasks website. 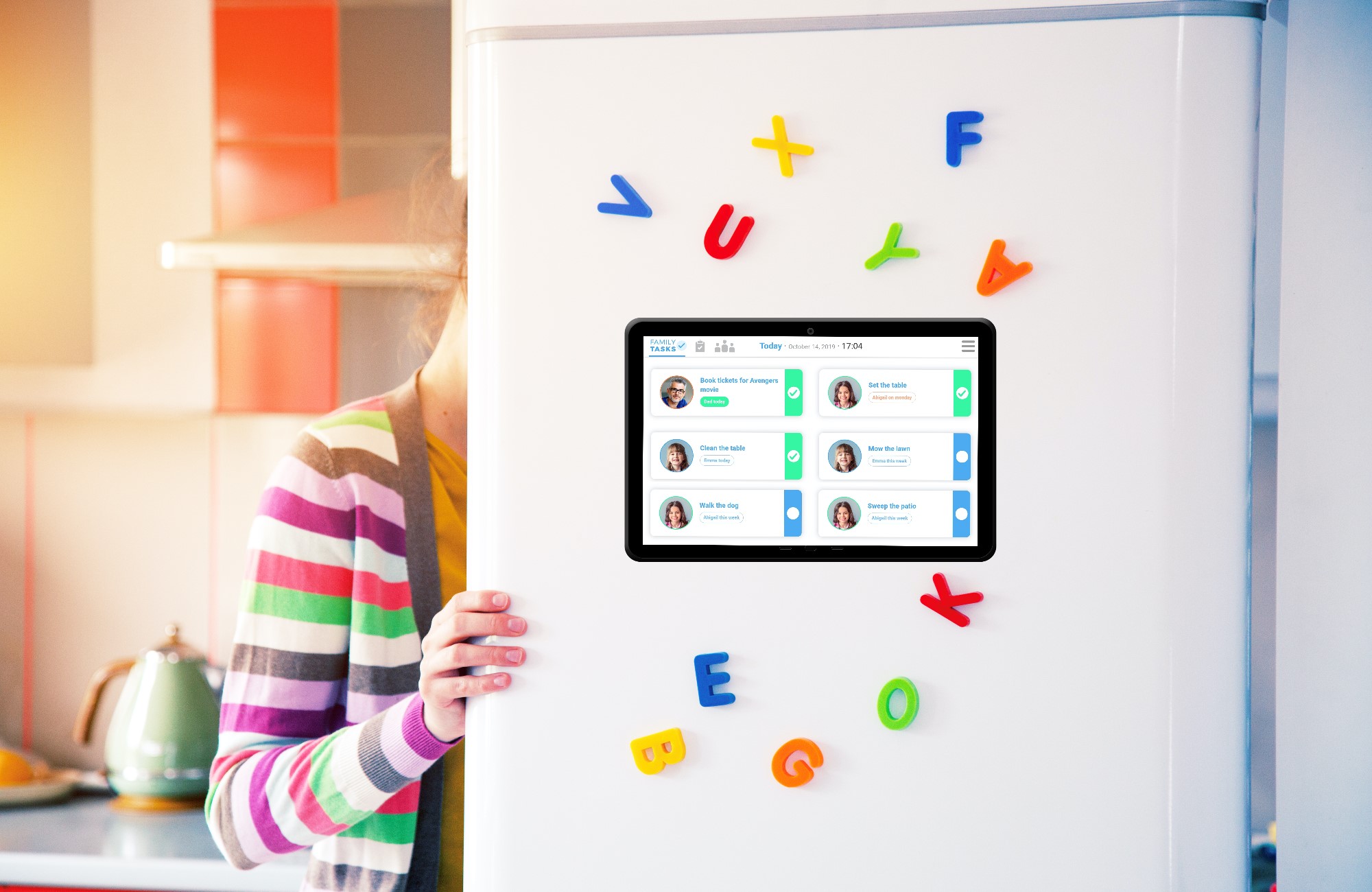 1- Focus and simplicity: where other apps want to solve all family issues and sometimes become over-complicated, loaded with sometimes useless features, Family Tasks does only what it says: chore management for your children. But it does it well and super easily.

2- Family Tasks is based on the credo that everyone should participate at home unconditionally. Hence it doesn’t come with a rewarding system to the contrary of other solutions.

From early feedback, what parents seem to appreciate most is the simplicity and efficiency of the system. But don’t take our word for it, just give Family Tasks a try and see for yourself if it fits your family’s needs!

wow! awesome idea, perfect for big family, helps to keep everyone organized and also helps to realize how much people around you do (which often happens to me, like when I feel I am the only giving a sh*t which 1000% times is not right)

Thank you for sharing this article, this is really a great way to interact with the family and the various tasks that arise in the process of family life.

That is an awesome idea. I am saving your post and I will start with that idea for the new year. Thank you for sharing.

I like this idea. I could only wish we had this when the kids were a whole lot younger. I will let my sister know about this. Her kids are both in their tweens and starting to “grow a world of their own,” which makes it difficult to make them do chores.

This is such a great idea and i think i really need something like this in my home because it always seems to be full of chaos at different times of the day.

That is so clever to use the technology that kids grow up with these days to motivate and track their participation in home chores.

Great idea, showing clever ways to interact with your family and family life.

I agree that it’s important to get kids participating in family chores at a young age. Family Tasks sounds like the perfect app for that!

Wow, such a nice idea it’s so important having a Family Task to learn how to manage and organize things. This simple idea would help a lot on how to work and accomplish things 🙂

how to cure candida

We allow you an unparalleled access to the natural treasures of the Land of the Thunder Dragon. As a reputable Bhutan adventure tour operator, we have been providing our clients with high-end services and helping hands on guidance and advice. With our company, you can travel into any part of this mystical land of Bhutan

As a reputable Bhutan tour operator, we provide our clients with exceptional service from planning the logistics of traveling to Bhutan, helping clients plan their adventure in Bhutan, and providing bi-lingual guide service during their visit.

Weddings in Los Angeles would be more magical if you hire Divine Grupo Musical Los Angeles. Choices are endless from a skilled string quartet to a more conventional accordionist or mandolin and guitar. So, whether you need classical musicians or a swing band or a lively jazz, our wedding experts would help you in the choice of the best musicians

The history of the island goes back as far as Eric the Red and his band of Vikings who settled on the southwestern coast. There is evidence of Norse habitation for 500 years, but during the Little Ice Age, their settlements disappeared. The inhabitants of the island are now mostly the Inuit peoples who have populated the region for nearly 1000 year

There are hundreds and thousands of online accounting service providers with different qualifications and level of experience. Choosing the most suitable and trustworthy accounting software is a bit difficult task, but if you do a thorough homework, you can make this possible easily.

TPG contractors offer the best service. We answer your question as soon as possible and visit your house to examine the problem. After analyzing the situation we make an appointment (sometimes urgent situations are solved at once). If you have got leakage because of pipe cracks, then Sewer Pipe Replacement should be done.

Plumbing industry has marked its status as an indispensable part of the society in the long lengthens part of the history. Unarguably, the contemporary world acknowledges the importance of clean water drainage, Plumbers North York and circulation system along with secured garbage disposal arrangements

Hello, thank you in regard to information! I repost in Facebook

thanks for some awesome ides it totally worth it

Hello, thank you in spite of word! cost of viagra 100mg http://viapwronline.com I repost in Facebook.
viagra problem

Thank You for this wonderful blog, this blog has help us a lot

Cialis cialis without a doctor prescription legitimate cialis by mail

Hi, Thanks for sharing amazing ideas in your post! I liked it.

It is possible to buy graduate SOP writing services online, thanks to technology.