You are at:Home»2016 Holiday Gift Guide»The Secret Life of Pets on Blu-ray & DVD

The Secret Life of Pets is the cutest movie, and it will be released on Dec 6, 2016. 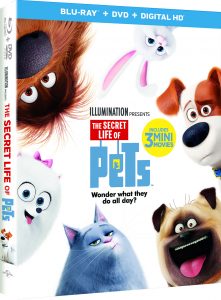 Jacob, my 5 year old, can watch this movie 5 times a day.  He loves it, and the laughter just gets stronger, and stronger, each time we watch it.  He says it’s his favorite movie.  My 19 year old, daughter, loves it too.  She watches it with Jacob, and they just go crazy laughing.  Joe, my husband, even enjoys it, as much as I do.  Joe’s favorite is the rabbit, because it’s played by Kevin Hart, his favorite comedian.

This would be the perfect movie to get your little one, or big one, for Christmas.  We truly love the animated movie, and so do the kids.  The funniest part, is when they are in the sewer.  It’s just an all around great movie.

This holiday season, the answer to the question “Ever wonder what your pets do when you’re not home?” is answered when The Secret Life of Pets comes to Digital HD November 22, 2016 and 4K Ultra HD™, Blu-ray™ 3D, Blu-ray™, DVD and On Demand December 6, 2016 from Universal Pictures Home Entertainment. The humans behind the Despicable Me franchise present America’s top-grossing original film of the year, the animated comedy is a worldwide hit with over $834 million in global ticket sales. The Secret Life of Pets is “non-stop action and laughs,” says Peter Travers of Rolling Stone. The 4K Ultra HD™, Blu-ray™, DVD and Digital HD versions feature nearly an hour of bonus content, including three hilarious mini-movies: the all-new Norman Television and Weenie PLUS Mower Minions which debuted in theaters and is now available to own.

we really enjoyed this movie, too. not much that, as a parent, i might omit or change. we laughed pretty hard and my daughter is a big fan.

My son who never watches tv or movies can’t get enough of this one, I love the movie

Great voice cast! We haven’t seen this yet but it sounds like a great movie to enjoy with the kids.

I can’t wait to see this movie. It sounds hilarious!

My son can not wait to see this movie. It looks like such a fun movie.

We loved this movie, our favorite animated film since Frozen.

This looks like a great movie for families to watch together. My family loves animated movies about animals. I’ll have to check this movie out.

I love watching these very funny animated movie with my family. This new one Secret Life Pets movie sounds like one that I want to watch for sure.

This is such a cute movie and gives kids imagination.

I have not watched the movie yet but so far have only heard only great things about it. We are planning on taking the grandson to go see it this month.

We want to see this movie, I bet my daughter would adore it, she loves pets. Really excited about Louis CK and Ellie Kemper being in it.

It is a good movie for any age, and Kevin Hart’s character is my favorite too! Thank you for the chance to win!

This is one I want to watch with my nieces and nephew.

This movie looks so cute! We can’t wait to see it!

I loved the movie, Very cute! It was pretty funny too.

This movie sounds really good I always wondered what animals were thinking and doing when I was not around.

We have not seen this movie, but some of our grandchildren did, and liked it very much.

My two grand kids want to see this!

So Kevin Hart is playing a hare and not a hart! That’s different. Bound to be funny, then.

This movie was great. My daughter and I went to see it. I would love for my 3 year old granddaughter to see it as well.

This movie looks so cute, can’t wait to see it.

Never saw the movie, but looks awesome to watch.

My kids and I have never seen this movie but from the previews that we have seen it looks like a funny and great cast!

My daughter and I saw this movie when it came out and we both loved it!

We adored this movie, as pet owners we got some special chuckles.

This is such a cute family movie. THank you

Looks like a funny movie to watch with the family.

This was the first movie my kids saw in 3d at the theater and they were glued to the screen. It was such a cute movie!

This was the first movie my kids saw in 3d at the theater and they were glued to the screen. It was such a cute movie!

This was such a great movie and my kids new favorite!

This was such a great movie and my kids new favorite!

I looks like a cute and funny movie. Our daughter enjoyed it.

I want to see The Secret Life of Pets.

I love movies with cute animals!

My grandkids love this movie

this movie was great. I took my daughter and we really enjoyed it.

This looks so cute! 🙂

Definitely a great idea to make a movie on!

My granddaughter would love this movie! 🙂

My granddaughter would love this movie!

I have 4 cats and 3 dogs which we love and this movie with the animals looks so funny my kids cant wait to see it.

I saw this movie in the theater. It is so cute and funny!

I can’t wait to see this move, I know my kids will love it.

I haven’t seen this yet. It looks like so much fun.

We saw this in the theater, both kids enjoyed it!