You are at:Home»2013 Holiday Gift Guide»Complete Spanish Set by Little Pim So Your Little One Can Learn Quickly!

If there’s one thing I’ve learned as a mom, it’s that kids pick up things much quick than us adults. And because of their quickness to learn new things I try to teach my kiddos as much as I can while they are still in that great learning stage. LittlePim has made my life easier than they could ever imagine. I’ve been wanting to teach the kids a second language, the problem is, I only speak English.

LittlePim has established an amazing opportunity for me, my kids, you and your kids and anyone interested in learning a second or third language! I personally selected Spanish for a couple of different reasons, the first being that it’s the second most spoken language in the USA. The second reason is that we plan to vacation in Mexico next year and the idea of being in a foreign country with my little ones that would otherwise be unable to communicate should they become separated from us is deathly terrifying to me. 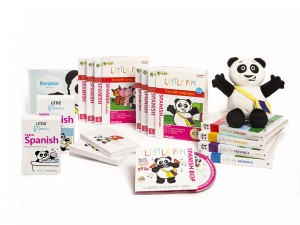 Take a look at this adorable Spanish learning video.

Little Pim has graciously offered to give a huge 20% discount on any Little Pim products. Please use code LPHOLIDAY when checking out at their website.

LittlePim has been generous enough to offer one lucky Mom Blog Society reader a chance to win a Complete Spanish Set by Little Pim. Simply click the image below to enter via the Rafflecopter. GOOD LUCK!

It is so important for me that my girls learn spanish so I am so glad to hear of a wonderful product to help me teach my kids how to speak spanish!

I think it would be great for my kids to know how to speak Spanish! The more languages the learn and know the better off they will be I believe.

Little Pim in on my list for all the littles this Christmas! Learning another language is so important when you are young.