You are at:Home»Travel & Living»6 Great Things about Living in Texas 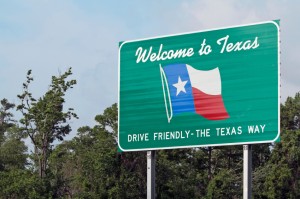 America the beautiful, how great you are. With rolling hills, incredible sights, and some of the most amazing cities in the world, it’s just so great to live in a country that’s altogether pretty damn great, even with all the foibles we seem to be running into as of late. I mean, where else can you eat chicken stuffed in-between two donuts?

Yup, life is grand here in freedom country, but it’s a definite fact that some states feel the freedom a bit more than others, and one of those states is Texas. Home of the idea that “bigger is better” Texas is one of the few states that you can never doubt there red white and blue heritage. With the best food around, some of the most boisterous locals, and a culture that just screams “’Murica”, you can’t get better than the Lone Star state when trying to find the most American locale in the world. I’m not saying it’s the best state in the world but…well, okay, maybe I am! Here are some reasons why you should be living in Texas.

Tex-Mex food is God’s gift to this great earth. Combining the deliciousness of Mexican food with the ‘Murica of Texas food, Tex-Mex gives everyone a reason to rejoice day in and day out. And, while lots of states now serve this delicacy, only Texas has the original and best; thank you Texas, for your Tex-Mex-y goodness!

With big steak houses, big spans of land, and big homes (for cheap, too), Texas embodies the idea of bigger and better, even as it created it. Seriously, everything really is bigger in Texas, and it’s something you won’t ever forget.

Feel subjugated by “the man”? Not exactly happy with our current state of affairs? If so, then Texas is the best place for you. With some of the lowest taxes anywhere in the US, you will be able to afford pretty much everything; it really is pretty awesome.

And you get them too! Nowhere else in the states does anyone hold to the 2nd amendment as much as we do in our state. That means you don’t need a permit or a license, and it’s easier than anywhere else to buy a gun. Political differences be damned, if you want a gun, this is where you should go.

With the economy in the state it is, chances are you’re probably looking for a job. If that’s the case, you guessed it; Texas is perfect for you! With tons of land, even more jobs, and a fairly high standard of living, you will more than likely find the job that you want (and get paid well doing it).

The final reason it’s so great to live here? Because you actually can! With some of the most land in the United States, real estate ranges aplenty, and for the cheapest prices around. You can find homes in Texas that cost less than you pay now, and still get a much bigger home in a nice neighborhood. In all honesty, you’re basically being paid to live here with how cheap everything is!

So, if you feel a bit of the Lone Star brewing in you, why not check out Texas? It’s one of the best places to live, and it will surely treat you right.

Tyler Fleck is a blogger who has had his work published all over the internet; however, this article is written for RL Worth, offering commercial real estate in San Antonio, Texas. Click that link there to visit their site for more information. Thanks for reading!