You are at:Home»Giveaways»Super Wubble Brite Makes a Perfect Gift! Enter the Giveaway today.

Disclosure: This post is sponsored by Wubble Ball. As always, opinions are my own.

Winter is fast on our heels which means we are also going to have some REALLY bored kids! Sure, we have video games – and even board games – if you can get your kids to sit long enough to play them. But what about something new and fun to shake up the same-old-routine?

You have seen me write about the Super Wubble Bubble Balls before – but now they have a NEW fun Wubble that glows in the dark! The Super Wubble Brite is the newest creation in the line of Wubble Balls. I mean who doesn’t want to play with a huge, light-up bubble?

The Super Wubble Brite is made of even stronger material than the original Super Wubbles. Whether playing with it indoors or outdoors, you can kick it, whack it, throw it, bounce it, or sit on it. It floats, wobbles, dribbles, spins, and smashes. Plus, deflate it for storage until you’re ready to play again.

It also includes a flashing light for glow-in-the dark fun! Simply press the button on the light to illuminate the Super Wubble Brite ball. The ball will flash for a total of 20 seconds before the light will stop and need to be pressed again. The Super Wubble Brite ball looks really cool lit up at night and is a lot of fun to play with in the dark.

Just the idea of the Wubble balls are pure genius! Frank, a father of four children, is the mastermind behind the Wubble ball. “So one day, while blowing giant bubbles in front of our house, one of my kids said “I hate when my bubbles pop! I wish I could play with them!” I had heard this from all my kids over the years, time and time again. But this time, I really took it to heart because my two little ones truly looked disappointed that they couldn’t actually play with their bubbles. And so began the quest to make this wish come true.”

Not only can the kids have a blast with this ball for hours, it can be done inside or outside. And with winter hot on our heels, having something fun and entertaining that can be played with inside and isn’t a video game is great for parents. Plus, these Wubble balls are affordable enough to make great gifts for the upcoming holiday season! 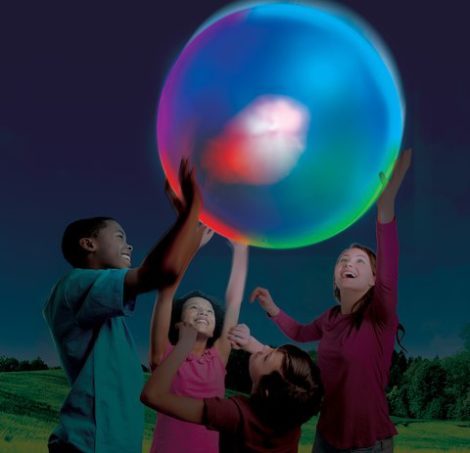 Wubbles can be kicked, thrown, bounced, and sat on. They’re super strong and able to withstand even the rowdiest bunch of kids. You can find Wubbles in a few different versions. Super Wubble, Water Wubble, Wubble Brite, Wubble X, and Tiny Wubble are all guaranteed to entertain kids (and adults) for hours.

The Super Wubble Brite brings the Wubble to an entirely new level. It lights up red, green, and blue from the inside for hours of entertainment both indoors and outdoors. It’s super fun to play with at night – imagine the game of Dodgeball you could get going with it! How about a Wubble Dance party? The adults would have just as much fun as the kids! Come on, don’t tell me you didn’t just think about how much fun this could be! 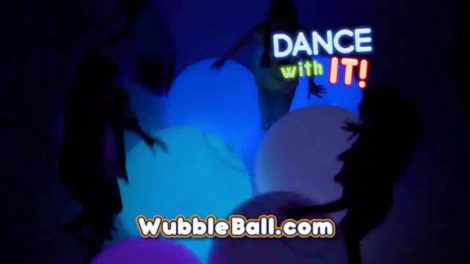 Kids popped the ball? No problem! You can even repair it with the patch kit. The Super Wubble Brite is for ages 6 and up. The giant size and squishy feel of the ball will be hard for any kid and adult to pass up. The ball looks and feels cool, especially when the lights are going and you’re playing a game of catch in the dark.

Enter to win your OWN Super Wubble Brite!