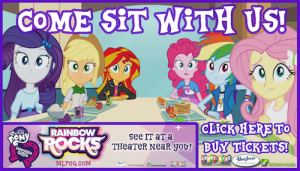 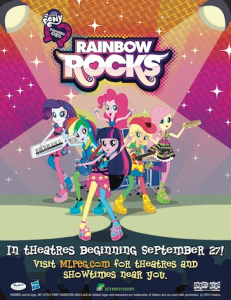 Tame your ponytails because it’s about to get rocky! Hasbro Studios and Shout! Factory partner with Screenvision to bring “everypony” a sequel from the successful feature of My Little Pony: Equestria Girls comes … MY LITTLE PONY EQUESTRIA GIRLS: RAINBOW ROCKS in theaters September 27th! Dance in your seats, wiggle your tails, and get ready to rock out as Applejack, Pinkie Pie, Rainbow Dash, Rarity, Fluttershy and Princess Twilight form a new rock band that’ll go head-to-head with the newest girl group in Battle of the Bands at CHS.

Book your tickets at a theater near you: http://www.screenvision.com/cinema-events/my-little-pony-equestria-girls-rainbow-rocks/