You are at:Home»Kids»Lalaloopsy Babies First Steps

Go Gaga For A Sew Cute Movie Adventure Based On The

Available On DVD, Digital HD And Video On Demand October 14 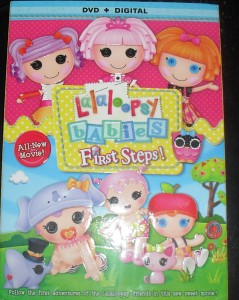 The sew cute Lalaloopsy characters reminisce about being babies, and how they met in this adventure filled DVD.  They find their pets, for the first time, as well.

My son sat and watched this DVD from beginning to end, and he’s only 3.  He really enjoyed watching the characters as babies.  Even my 17 year old daughter watched it, and really enjoyed it.  I watched with them, as well.  Since Jacob started watching Lalaloopsy, I’ve watched with him.  It’s always super cute!

Peanuts, Mittens & Blossom are wonderful in this movie.

Join the Lalaloopsy friends for this sweet movie about their first adventures together! After they discover an old scrapbook filled with photos and mementos from when they were babies, the friends reminisce about their nursery days where they found their special bond and first met their adorable pets. They realize how those early adventures helped to shape their personalities, and reminisce about becoming stitched together, friends forever in this delightful, fun-filled movie that Lalaloopsy fans will treasure!

Featured on “The Talk” host Julie Chen’s top toy list, the Lalaloopsy collection continues to be one of the fastest selling toy brands. The Lalaloopsy Babies: First Steps! DVD features bonus material including two Lalaloopsy Mini Adventures and a Pet n’ Seek! Interactive Maze, and will be available for the suggested retail price of $14.98.

You also have the chance to win a copy of this DVD and the Dolls featured in it.

I love how cute the movies are and I know the girls really love them!

I love the little babies but had no idea there was a video about them! I can’t wait to check it out.

My girls love these dolls and they recently saw one of the movies for the first time, and loved that too : )

My daughter loves lalaloopsies. This DVD looks so cute and the babies are adorable.

My daughters would love this…they love everything LaLaLoopsy! This would make a great gift for them!