You are at:Home»Entertainment»JFK: A New World Order

This year commemorates the 50th Anniversary of the death of John F. Kennedy.

I recently had the opportunity to work with Mill Creek Entertainment and review one of the many movies that they have to offer. We were sent JFK: A New World Order on Blu-Ray and DVD to review free of charge. JFK: A New World Order is a documentary commemorating the 50th Anniversary of the death of John F. Kennedy. 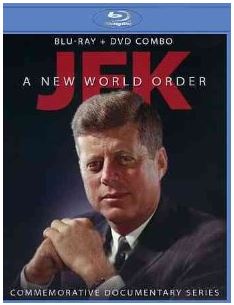 The first program includes JFK’s Early Years. John F. Kennedy’s life through his election as the 35th President of the United States. The second program, For All to See, includes the 1960 Presidential election and the many obstacles, including familial and religious, that Kennedy needed to overcome to win the United States Presidency. The third program, New Frontiers, includes the beginnings of John F. Kennedy’s presidency. The fourth program includes Doomsday Averted The Bay of Pigs and The Cuban Missile Crisis, to his proudest achievements, the Limited Nuclear Test Ban Treaty. The fifth program, A Wall of Words. Includes the origins of Soviet-American tensions in the divided city of Berlin from the final days of World War II up through the time of John F. Kennedy’s Presidency. The sixth program, War Within & Without Part 1 Civil Rights, is from his record as a senator up though the transformation near the end of his life that would help inspire the Civil Rights Act of 1964. The seventh program, War Within & Without Part 2, includes the events in Southeast Asia that eventually led to America’s war in Vietnam. The eighth and final program, Camelot And Beyond, includes his health and private life, marriage and family, the myth of Camelot, and finally, his assassination and legacy.

If you would like more information or if you would like to purchase JFK: A New World Order, please visit the Mill Creek Entertainment Website. JFK: A New World Order is also available in major retail stores nationwide. Be sure to stay up to date on all of the latest news and products from Mill Creek Entertainment by following their social media pages on Facebook, YouTube and Twitter. While you are there, be sure to follow Mom Blog Society on Facebook.