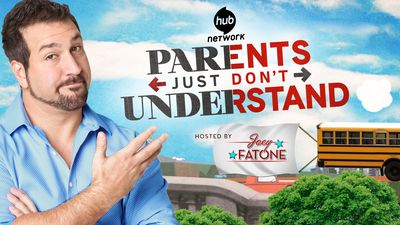 TO PREMIERE AUGUST 23 ON THE HUB NETWORK

Unique Reality Series That Gives Kids and Their Parents a Chance

to Walk in Each Other’s Shoes

LOS ANGELES – The Hub Network will premiere the unscripted, parent-child swap series “Parents Just Don’t Understand” on Saturday, August 23 at 7 p.m. ET/4 p.m. PT with musician and TV personality, Joey Fatone (‘N Sync, “Rewrapped”), as the host. The unique reality series gives real kids and their parents a chance to find out what it feels like to be in the other person’s shoes. Fatone also serves as an executive producer of the series, along with Christian Sarabia, Rabih Gholam, Bicha Gholam, Nicole M. Reed and Allegra Newman. Cindy Nemes and Michael Wilder serve as co-executive producers. The 22-episode series will be produced by Endemol’s 51 Minds Entertainment for the Hub Network, champions of family fun and the only network dedicated to providing kids and their families entertainment they can watch together.

In the premiere episode, “The Touchdown Maker and Cupcake Baker,” Fatone swaps the lives of a 13-year-old and his underappreciated mom of five children. While the son tackles taking care of his siblings and a demanding job at the railroad, his mom must power through chores and football practice. Continuing in the spirit of “Freaky Friday,” the series will also showcase other parent-child swaps including a teenage ballerina and her feisty single-mom, a roller derby devotee and her princess-loving mom, plus a single-dad who takes on his son’s rigorous athletic schedule.

Known for his multi-platinum selling pop group, ‘N Sync, Fatone has developed a versatile and cross-generational range of talents both on and off the small screen. Currently hosting “Rewrapped” Fatone’s television credits include “The Singing Bee,” “Dancing with the Stars,” “JoJo’s Circus,” “Higglytown Heroes” and “Hannah Montana.” He has also starred in the Broadway musicals, “Little Shop of Horrors” and “RENT.”