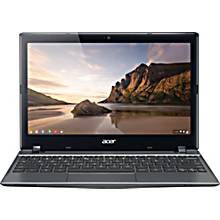 When I think of notebooks, I imagine this small laptop that mimics a kids toy. I’ve never owned a notebook, much less a Chromebook, and I must say, I’m pleasantly surprised. Although I envisioned a kids toy, it’s far from it. This little baby is packed with a powerful punch. First let me say, when I first set up the Chromebook, I immediately went to my Norton antivirus account so I could download the virus protection, however it kept telling me that it couldn’t be installed on the computer. So, I did a little digging on the Chromebook to see if it had McAfee already installed and it didn’t. But, that’s when I came across the “Stay Safe app”. The Google Chromebook has a built-in-virus protection with multiple layers of security. Which means you don’t have to pay for antivirus software! I’m already in love!

The Acer C710-2834 11.6″ Chromebook  has Intel Celeron Processor 1007U 1.5GHz 2MB L3 Cache with 2GB DDR3 Dual-Channel Memory and 16GB SSD Hard Drive. It is available at Staples for only $199! That is the cheapest I’ve ever seen a Chromebook. Leave it to Staples to offer the best deals around! And with Christmas just around the corner this is a great find! I know I will be putting a couple of these amazing Chrombooks under my tree this year! 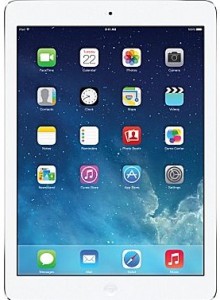 Another great buy I found at Staples is the New Apple iPad Air with Retina display with WiFi and 16GB It’s 20 percent thinner and weight just one pound! I thought the iPam mini was tiny but this rocks!

Plus the A7 chip with 64-bit architecture, ultrafast wireless, powerful apps, with up to 10 hours of battery life.2 And over 475,000 apps in the App Store are just a tap away.3. The monitor is a big 9.7″! It also has a 5mp iSite camera with 1080p, HD video recording and Facetime HD camera. And Staples has the best price on the new Apple iPad Air I’ve found!

Staples is by far the best place to shop for your tech gadgets this year. Their prices are simply unbeatable! And, if you’re like me and love to shop on-the-go you can download the Staples Mobile App to your iPhone or Android and shop from anywhere, anytime!

From technology, to household items such as coffee machines to office supplies, Staples has been my one-stop-shopping choice for the last seven-years! Why not make it yours too! And don’t forget to check out their weekly ad online, you can save big! I look at the Staples weekly online ad each week before I make a purchase of any kind. Because 9 times out of 10 I can save big buy going to Staples first!

Previous ArticleShoes from Hotter
Next Article Put the Android 4.0 Tablet PC 7 inch Under Your Tree This Holiday Season!

This Chromebook would come in handy when I do home parties

Chromebook will definitely get looked at the next time I need a computer. thanks for the info.

v. kennedy
Reply to  april b

I’ve seen ads for the Chromebook but haven’t yet checked it out. I will definitely take a look at it the next time we’re out shopping!

Good to learn about the deals at Staplea. The chromebook in on the list.

This looks very nice, will have to check it out next time out shopping!

send me one asap. free.

Acer is a great brand. I need a new one and I am considering this one. Thanks for the information.

I have been wondering if this would be right foe me, thanks for the review!

I like to know the way that there is antivirus already on the laptop. Looks good !

Oooh this is so on my wantlist. I love the size of this laptop and all of the cool features. Great review!

I would LOVE to have a new Chromebook! I like the fact that it has a built-in-virus protection with multiple layers of security!

Staples has amazing products. I love the Chromebook!

The New Apple iPad Air with Retina display looks awesome! On my Christmas list this year.

Wow this chrome book is pretty amazing with built in virus protection, and Staples really has good prices

I am so impressed with the chromebook, its features, price and name brand are definitely worth investing in. Acer is s great computer.

I WOULD LOVE TO WIN THIS LAPTOP. WOULD BE GREAT TO HAVE SOMETHING THAT DIDNT FREEZE ALL THE TIME & NOT UP TO DAY.. THANKS SO MUCH FOR THE CHANCE

will have to look into these!

Thanks for the review! I hadn’t considered this brand but I will now!

I look forward to trying out the Chrome book.

I was thinking about purchasing one for my daughter who is going off to college in Jan. Thank you so much for the review, it is very helpful.

They are using the chromebook in school’s now!

I love the fact that this chromebook has it’s own anti-virus protection.

I like that it comes with antivirus software! Nice feature. All computers should.

Great review. My sister has an Acer and loves it

I am looking for a new laptop. Thanks!

My friend has one and says it’s great!

Thank you for the information on Chromebook. I will share with friends that are looking for a new computer.

I have been looking at laptops for my son when he starts college, this one is now on my radar. Thanks!!

That’s a sweet price for a sweet product. This will definitely be one of the top runners when I make my next purchase.

I love the feature that Google Chromebook has built in virus protection already in it. I did not know that…thanks for pointing that out in your review

The Chromebook looks interesting, but the iPad Air makes me want to drool!

the anitvirus is a plus! that is a great feature to have tired of paying for it

I will definitely be checking this out! thanks

I was looking at these on-line. Would love to have one 🙂

I use the Chrome browser on my desktop. I can just imagine how great this would be.

I would love a chromebook. Never had one before.

Thanks for the review. I think the chromebook would make a good Christmas gift.

I’ll definitely add Staples to my list when I’m shopping around for electronics.

I would’ve love to have the chromebook!

I hope to get a laptop or Notebook someday.

I’m going to have to check out the Chromebook. I can’t believe it’s only $199.

I have been very curious about the chrome book. So far I love all things Google and am really thinking that this may be my next laptop.

I will look at this when I need a new computer!

Oh! I must investigate…just in time for a new one. After looking at a few, I have come to the conclusion that there is alot more to be seen! Thanks for the great review 🙂