I received the Planes:  Fire & Rescue 2 pack of puzzles earlier this week, and I’ve already lost count of how many times we’ve put it together. 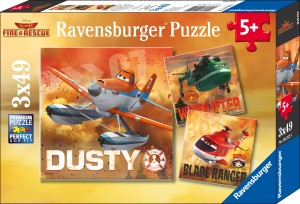 My son, Jacob, age 3, loves this double pack of puzzles.  It says ages 4+ but as long as we help him, he has no problem putting it together.  By helping, I don’t mean doing it for him, but guiding him in the right direction.  I’m really enjoying this one on one time with Jacob.  He’s getting so good at putting these together.  Even grandma has done it numerous times.

It’s so much fun to sit down with Jacob and have something to do that’s a little time consuming.  He does listen when you tell him where to stick the pieces, and it’s all good fun.

There’s a puzzle for everybody in your family available, including: