You are at:Home»Entertainment»NICKELODEON SERVES UP BONE-CHILLING HALLOWEEN PREMIERES

Below is the rundown of Nickelodeon’s Halloween-themed premieres (all times ET/PT): 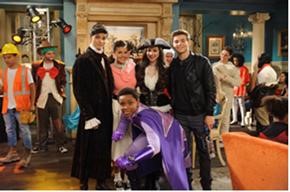 8:00 p.m. – The Haunted Hathaways and The Thundermans (one-hour crossover special) “Haunted Thundermans Pt I and II”

After a super-villain escapes Ghost World on Halloween, the Thundermans head to New Orleans to join forces with the Hathaways and the Prestons to defeat the ghoul. However, saving the day gets complicated when super-powered trick-or-treating, sibling jealousy and teen romance get in the way. 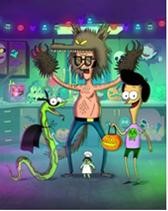 SwaySway and Buhdeuce invent a loaf of bread so irresistible it turns their customers into bread‐craving zombies.

When Jasper goes as Kid Danger for Halloween, he takes things too far and is mistaken for the real deal. It’s then up to the real Kid Danger and Captain Man to come to his rescue.

The quads excitement for the Halloween school dance is outdone only by their parents who are chaperoning.  Dawn is nervous that a boy she likes will ask her to be his date; Ricky and Dicky compete over the same girl; and Nicky chooses the perfect costume. Meanwhile, Tom and Anne try to have the romantic dance they did not get at their own prom.

“Pups Save a Ghost” – A mysterious ghost is causing havoc around the Lookout at night. The pups and Chase set up a stakeout to bust it, but discover that it’s not a ghost after all – it’s Marshall… sleepwalking!  Now the pups have to save the slumbering pup as he sleepwalks through town. / “Save a Snow” – The pups are going to put on a Medieval play in town square, but Cap’n Turbot’s castle stage prop ends up collapsing and trapping him.  Ryder and the PAW Patrol have to save Turbot and Marshall, who then has to save the show when Chase gets sick and can’t play the lead role.

Stephanie feels unneeded when all of the kids have their own plans and ditch her on Halloween. Meanwhile, Charlie tries to maintain his perfect rating as the best house in the neighborhood.

Wally and friends discover the biggest treat in the world while out trick-or-treating.  In order to get it, they have to pass three magical challenges set up by their wacky neighbor Wizard Jeff.  This episode guest stars “Weird Al” Yankovic as Wizard Jeff.

When Specs goes missing while looking for a mysterious Ghost Dog, Bea follows her into a spooky mansion and meets Scraps Stitched ‘n Sewn – who looks scary but is actually shy.

“Pop-Up Pumpkin Patch” – When a ghost swipes Zack and Quack’s candy while they’re trick-or-treating in the Pop-Up Pumpkin Patch, Zack’s determined to get the treats back in time for their big Halloween party. / “Up Popped a Spider” – When a spider pops up in the garden and scares Belly-Up, Zack heads off to find the six-legged bug the perfect new home.

TeenNick treats viewers to the complete second season of House of Anubis every Monday at 4 p.m. (ET) in October.

Nicktoons gets into the spooktacular spirit with “Get Your Halloween On!” featuring a marathon of the most costume-worthy characters including SpongeBob SquarePants, Power Rangers Super Megaforce, Avatar: The Last Airbender and Teenage Mutant Ninja Turtles, airing every Friday from 9 p.m. – 12 a.m. (ET) throughout October.