You are at:Home»Household»DYSON AIR MULTIPLIER 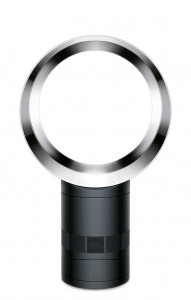 The Dyson Air Multiplier AM06 10″ table fan is incredible! Not only is it bladeless, but it’s remote controlled too! One of the things I love the most is that it’s quiet. The remote control offers 10 settings, oscillation control and a sleep timer. which can be programmed to turn off as well. The fan itself does not have blades. Air is accelerated through an annular aperture, drawing in surrounding air to project smooth, powerful, high-velocity airflow. I love that it’s bladeless because you don’t have to worry about the kiddos sticking their fingers in the fan. You can actually put your entire arm though the circle of the fan while it’s running. How cool is that?

Assembly is extremely easy. You simply snap the top and bottom together and it’s ready. The durability is amazing! I knocked the fan off the table which sits about three feet high, There was a loud crashing to the the floor and I was scared that I had broken the fan. After picking it up and turning it on I was amazed that not only did it still work, but it wasn’t even damaged cosmetically!

After using the Dyson bladeless fan for just a few short weeks, I can honestly say I would purchase this fan for every room in my house without hesitation.

Manufacturer’s Description
Instead of using blades, Dyson fans use patented Air Multiplier technology for powerful airflow projection. Air is accelerated through an annular aperture, drawing in surrounding air to project a high-velocity cooling airflow. And with no blades, the airflow is smooth – not choppy. Dyson engineers developed AM06 to be quieter and more energy efficient than its predecessor. Streamlined air channels reduce airflow turbulence so that air passes through the machine more quietly and with greater efficiency. It also has an acoustically engineered motor bucket to reduce vibration and therefore noise. The result is that AM06 is 75% quieter than AM01. Energy efficiency has also been improved. With smoother airflow through the machine, the DC motor doesn’t need to work as hard – so less energy is required to channel the air for powerful performance. The addition of a sleep-timer further reduces energy wastage by ensuring the Dyson Cool fan switches off automatically when it’s not needed. AM06 can be programmed to turn off after preset intervals ranging from 15 minutes to 9 hours. AM06 comes with a remote control providing 10 precise airflow settings – as well as one touch oscillation control for smoother oscillation. For extra convenience, the remote is curved and magnetized to store neatly on the machine. With no fast-spinning blades or awkward safety grilles, AM06 is safe and easy to clean. And like all Dyson fans it comes with a free 2 year warranty – parts and labor.
Patented Dyson technology
Dyson engineers are constantly testing and investigating, trying to find new ways to make things work better. They improve existing technologies and invent new ones. As they work, they file patent applications to protect their inventions from copycat manufacturers. That’s why the only place you’ll find Dyson technology is inside a Dyson machine.

This fan would be perfect in our home since our little 10 month old grandson is mobile. He’s into everything. I love that this doesn’t have the blades and the remote control is a huge plus too.

Yes Dee, it’s so safe for little ones! I love the remote too. I can turn it up or down or even off from where I’m sitting!

I’ve wondered about these! My daughter is a lil one and this would be perfect!

I had no idea a product like this existed. This is so ideal. My two year old likes to stick his little fingers through the slates on the fan. It drives me crazy! All of the fans in my house are elevated so he can’t reach and the breeze goes right over our heads.

My husband has been talking non-stop about this fan. He saw it one of his tech sites and thinks it would be really cool for us. It seems much more practical better for pet owners like us. I am glad to hear too that it is very durable – I am a complete, total klutz so everything in our house has to either survive our dog or more likely…me!

We just had a bit of a heat wave here and i was so hot and ran out to buy another fan. I spent over $30 and it does not work to move air. I am looking into this Dyson-waiting for a promo because I need a fan that works!

I’ve seen this fan before and I just love that is has no blades. My kids always seem to drop items into the fan for some reason they just love doing that. I am happy to read that it’s durable and works so well. I’ll be looking into it.

I have heard great things about the dyson air multiplier this would so solve the fingers in the fan accidents. I love it

I’ve always wanted one of these ever since I first saw a display in a store!!! Awesome!!!