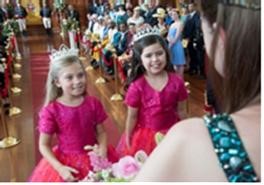 Santa Monica, Calif., (September 3, 2014) – Pint-size princesses Sophia Grace and Rosie make their royal debut on Nickelodeon in the network premiere of  Sophia Grace & Rosie’s Royal Adventure, Saturday, Sept. 6 at 8:00p.m. (ET/PT).  In their first-ever movie, Sophia Grace and Rosie are sent by The Ellen DeGeneres Show to a fictional country called Switzelvania as special correspondents tasked with covering the coronation of a new queen.

“We are beyond excited that Nick will be airing our movie,” said Sophia Grace and Rosie. “From appearing on the Kids’ Choice Awards to guest starring on Sam & Cat, working with Nick has been a dream come true for us.”

In Sophia Grace and Rosie’s Royal Adventure, the girls head to Switzelvania as correspondents from The Ellen DeGeneres Show to cover the royal coronation. Upon their arrival, they are mistaken for the King’s great great grandnieces by castle staff and are invited to stay. After meeting the three princesses, Abigail, Imogen, and Cordelia, who are competing for the throne, Sophia Grace and Rosie take it upon themselves to help the best candidate win. It will take some serious princess lessons and fun musical numbers — but if anyone is up for the job, it’s Sophia Grace and Rosie.

Fans can log on to nick.com/sophia-grace-and-rosie for all things Sophia Grace & Rosie including an exclusive sneak peek of the movie and a look back at the duos appearance on Sam & Cat.