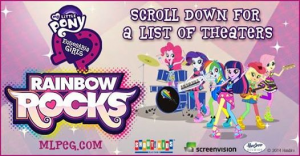 In high anticipation of MY LITTLE PONY EQUESTRIA GIRLS: RAINBOW ROCKS riding to a theater near you September 27th, http://www.screenvision.com/cinema-events/my-little-pony-equestria-girls-rainbow-rocks/), we want to re-introduce you to the upcoming stars of the feature film in these fun animated shorts that are not directly part of the film, but tied to it! Fall in love with each unique character that’s starring in the full-length feature film.