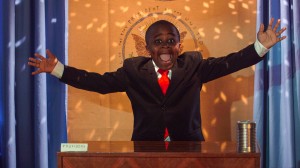 The Hub Network, champions of family fun and the only network dedicated to providing kids and their families entertainment they can watch together, will premiere an all-new series this June called “Kid President: Declaration of Awesome” starring YouTube sensation, Kid President (aka, Robby Novak), whose online videos promoting love, laughter, and having fun, have featured everyone from President Obama to Beyoncé. The announcement was made this morning by Kid President himself on his YouTube channel.

Ten-year-old Robby Novak created a worldwide following after his moving video, “A Pep Talk from Kid President to You,” went viral. That video is part of a YouTube series titled “Kid President” that has more than 75 million total views. Kid President’s online series is based on the belief that kids have a voice that needs to be heard and together with grown-ups they can make the world a better place. One of Kid President’s core philosophies is to “treat everybody like it’s their birthday.”

“At the Hub Network, Robby’s Kid President platform is one that we think everyone can embrace, because he is charming, clever, funny, inspirational and very relevant to today’s kids and families,” said Margaret Loesch, President and CEO, Hub Network. “With over 75 million views, we know ‘Kid President’ has the kind of cross-generational appeal that will speak to our core audience of children who like watching our shows with their parents and families.”

“Kid President is all about getting kids and grown-ups to work together to make the world more awesome,” says Executive Producer Rainn Wilson. “This show is an amazing blend of humor and heart, and The Hub Network is the perfect place for us to continue our mission to give the world a reason to dance. Plus, the network sent us an industrial-sized freezer full of corndogs. And we will do just about anything for corndogs.”

The docu-variety series reflects the universal values of kids and families across the country as seen through the lens of Kid President, whose playful spirit and positive approach to life inspires viewers to change this world for the better. In each episode, Kid President introduces a theme that is explored through interviews and interactions with a variety of diverse families. Each episode also features interactions between Kid President and a celebrity, as he has in the past with President Barack Obama, Steve Carell, and Beyoncé, among others.

The series is produced by SoulPancake Television, LLC, which was founded by Rainn Wilson. Wilson and Kid President creator Brad Montague are executive producers of the series; Shabnam Mogharabi, Sarah North, and Golriz Lucina serve as co-executive producers.

Don’t forget if you want to stay up to date on all of the latest news from Kid President be sure to follow his social media pages on YouTube and Twitter.