You are at:Home»Movies & TV»Heirs to Madagascar’s Royal Throne Are Born: 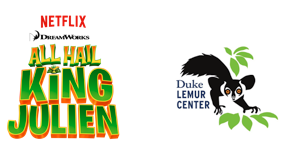 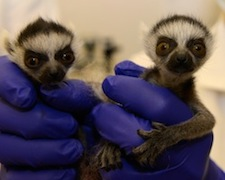 In a Milestone for the Planet’s Most Threatened Group of Mammals,

Both Named in Honor of (and Deference to) King Julien XIII 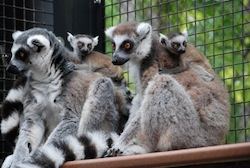 Princess Julien and her sister Princess Julien were born on May 4, but their birth was announced today following a month of careful monitoring. The announcement was jointly made by Duke Lemur Center and by King Julien XIII, star of the Netflix original series All Hail King Julien from DreamWorks Animation.

In an upset worthy of the tabloids, King Julien was shocked by the news that his heir apparent was not a boy – as he had anticipated following a prediction by his psychic adviser, Masikura the chameleon – but that his royal lineage would be secured with the birth of two females.  Nonetheless, Julien was elated and decreed that both infant lemurs would be named Princess Julien.

“I can’t believe they’re making more of me!  This is so awesome!” said King Julien, speaking from his royal throne atop the Baobab Tree in Madagascar. “My first royal duty will be to teach Princess Julien and Princess Julien how to shake their booties and party in the most regal of ways.”

Following a thorough check-up by researchers at the Duke Lemur Center, both Princesses Julien were healthy and clinging tightly to their mother, Sophia.  Father Randy and grandmother Cloris have all been united as a family and are looking forward to meeting their namesake King Julien XIII.

“Male or female, every lemur baby born is incredibly important,” said Janice Kalin of the Duke Lemur Center, the world’s largest lemur research facility. “Lemurs have recently been classified as the world’s most threatened mammal group.  Every time we can add one – or two – more to their ranks, it helps to stabilize the genetic diversity of these fascinating primates.”

An official naming ceremony for Princess Julien and Princess Julien will be held at the Duke Lemur Center on June 20, which will be presided over by the star of All Hail King Julien.  This will be the first opportunity for the public to meet the Princesses; they’ll also be able to greet King Julien himself.  For more information visit http://lemur.duke.edu/lemurpalooza-summer-2015/

The series is a hilariously off-the-wall animated comedy that follows the exploits of King Julien and his royal subjects, including his beleaguered adviser Maurice; his head of special-ops, Clover; and his most adoring subject, Mort.

“Every day, visitors to the Duke Lemur Center ask us to show them which lemur is King Julien – and now we really can,” added Kalin, who said that the Center’s primary mission is to protect the world’s lemur population.

The Duke Lemur Center is the world’s largest and most diverse collection of lemurs – Earth’s most threatened group of mammals – outside of Madagascar.  The Duke Lemur Center advances science, scholarship and biological conservation through interdisciplinary research, community-based conservation and public outreach.  By engaging scientists, students and the public in new discoveries and global awareness, the Center promotes a deeper appreciation of biodiversity and an understanding of the power of scientific discovery.

To learn more about the Duke Lemur Center and its activities, visit www.lemur.duke.edu.  Episodes of All Hail King Julien can be found on Netflix at www.netflix.com/KingJulien.