You are at:Home»Pets»Bringing Home a Pooch for Your Child? Consider These Kid-Friendly Breeds

Animals, like humans are all different from one another. They have different temperaments, nature, and characteristics. This is true when it comes to different dog breeds too. So if you had been planning to adopt just any dog for your kids, think again. 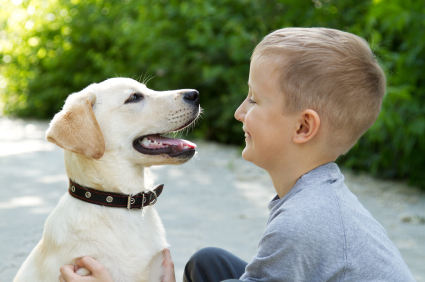 Certain dog breeds may not be able take well to the incessant noise that children make, screaming, and running about. They may also not tolerate having their ears or tail pulled at playfully. Of course, kids need to be taught to be gentle with pets. But some dog breeds are better adapted to having children around them.

If you are certain you need to bring a pooch home to be a loyal companion for your children, here are the best breeds to select from.

These large-sized dogs were originally bred in Scotland in the mid-19th century, when wildfowl hunting was a popular sport among the elite. The retriever breeds then weren’t as adequate as desired, which led to the Scots cross-breeding water spaniels and the retriever breeds.

Golden Retrievers are highly intellectual dogs, and their gentle temperament and playful nature make them perfect for families with kids. They also love swimming!

Labrador Retrievers are a people’s favorite and are prized as waterfowl hunting and sporting dogs. They also make for reliable assistance dogs to blind people, act as therapy dogs to people with autism, and are used by law enforcement and official agencies for screening and detection work.

Labradors are medium-sized dogs and are intelligent, playful, eager to please, and non-aggressive.

This small to medium-sized dog looks like a foxhound and was originally bred as a scent hound to track rabbits, hare, deer, and small game. Dogs of a similar size and serving the same purpose have been traced back to the 5th century BC in ancient Greece.

Beagles are intelligent, have an even temper, and lack inherited health problems. Their great sense of smell and tracking instinct is the reason they are used as detection dogs for prohibited agricultural imports and foodstuff.

They are easy to tame, adorable, emotional, and lively. What’s more, they have a melodious bark too! If you love Charlie Brown’s dog Snoopy from the comic strip ‘Peanuts’, you should definitely get a Beagle.

Pugs were originally brought into Europe from China in the 16th century. Pugs depicted in 18th century prints are tall and lean, but a square body, deep chest, compact form, and well-developed muscles are some modern breed preferences.

Pugs are even-tempered, have great charm, exhibit stability, and are playful and outgoing. They are a perfect family pet. Check out pugs for sale in TN.

A Collie is a medium-sized dog and is lightly built. Collies are herding dogs that originated in Scotland. The breed has spread to many parts of the world and has also diversified into several breeds such as the Border Collie, the Bearded Collie, and the Shetland Sheepdog. They are also cross-bred with other dog breeds. Collie breeds are used as working dogs, show dogs, and as pets.

These dogs display intelligence, like regular exercise, have a calm personality, and are friendly and energetic. They may try to herd children due to their instinctive nature; discourage it even if you find it amusing.

This stocky, medium-sized dog was developed in Germany from the Old English Bulldog and the now extinct Bullenbeisser. The name boxer comes from the breed’s tendency to play by standing tall on its hind legs.

Boxers appear to be very powerful but have a docile nature. They are trustworthy, loyal, and kind dogs. These dogs are alert and suspicious of strangers, making them formidable guard dogs. Boxers are also preferred for use as service dogs, guide dogs, and therapy dogs.

This breed is classed as a toy dog by the American Kennel Club and is the largest breed of toy dogs. Cavalier King Charles Spaniels gained popularity in the 17th century but lost favor after the reign of King Charles II. The dog was originally bred to be a companion dog that would comfortably fit on the laps of the aristocracy.

Though they are small in size, they can take well to supervised rough play, making them preferred pets for kids. They are easy to train, good with other pets and children, affectionate, and eager to interact. As they weren’t bred as guard dogs, don’t expect them to act as one.

This breed was developed in the county of Yorkshire, England in the 19th century. Yorkshire Terriers are also called Yorkies and are a type of terrier.

If you have very energetic kids, then this is the dog for you as Yorkies are very active. They are also intelligent and playful. Because of their instincts, they tend to nip a bit. But you can get rid of this by proper training.

Another toy dog that originates from the Central Mediterranean area, the Maltese is also known as the ‘ancient dog of Malta’, the ‘Maltese Lion Dog’, and the ‘Roman Ladies’ Dog’. The Maltese was bred to achieve its small size and appears to be a descendant of a Spitz-type dog found among the Swiss Lake Dwellers. Evidence also suggests that this breed may be related to the Tibetan Terrier.

Maltese dogs are affectionate and playful. Despite being bred for lounging around, these dogs are willing to learn and are highly trainable. Girls will love adorning these beautiful dogs with dog accessories.

Poodles were originally bred in Germany as a water dogs and the breed was later standardized in France. Miniature and toy poodle breeds were developed from the standard variety. They are good natured dogs, need plenty of exercise, and love playing with kids.

They have clean habits and do not shed. This quality is preferred by people who are allergenic to pet dander. If you have a child who is respectful of pets and is allergic to pet dander, you can think of bringing home a poodle.

Most dogs love kids but it is important for you to carefully select a breed so that neither your children nor your furry pal gets harmed in any way. If you love small breed dogs, check this website for tips and reviews.

We are in the process of researching dogs for our family so this list is so helpful. If shedding is a concern, any crossbreed with a poodle is a good option.

I like that you included ones that don’t shed. My little chihuahua x is great with my daughter and they have a really great bond but she shed’s everywhere, so I find myself cleaning up after everyone.