This Year’s Mardi Gras Celebration Delivers More Excitement Than Ever Before With an Extended Concert Series Featuring Robin Thicke, Nelly, The Wanted and More 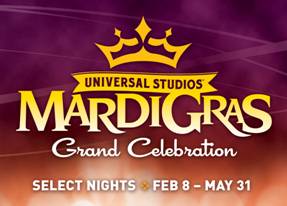 ORLANDO, Fla. (January 15, 2014) – Universal Orlando Resort comes alive this spring with its Mardi Gras 2014 celebration, featuring 20 nights of electrifying concerts from the biggest names in music, coupled with the essence of the legendary Bayou bash.

This year’s powerhouse musical lineup features a diverse array of talent, from R&B superstar Robin Thicke, whose hit single “Blurred Lines” topped the Billboard chart for a near-record 12 weeks, to UK pop sensation The Wanted, who has sold nearly 10 million albums worldwide, to Latin idol Prince Royce, who reached number one on the U.S. Hot Latin Songs chart with “Corazón Sin Cara.” Also performing is rock band Daughtry, Grammy award-winning Hip Hop artist Nelly, and the classic rock group Foreigner, one of the best-selling bands of all time. For the complete line-up, see below.

Guests can also catch colorful beads by the handful during this year’s parade, which will feature 12 vibrant floats, including three new additions celebrating Jules Verne’s novel, “Around the World in Eighty Days.” All of the exquisitely detailed Mardi Gras floats are engineered by Blaine Kern Artists, the same company that has been hand-crafting floats for the iconic New Orleans celebration since 1947.  Plus, guests can visit Universal Studios Florida’s very own French Quarter Courtyard to enjoy authentic Cajun cuisine and see performances by bands pulled straight from Bourbon Street.

The excitement of Universal Orlando’s Mardi Gras celebration is included with admission to Universal Studios Florida, where partygoers can also join Optimus Prime in the fight to save Earth on TRANSFORMERS: The Ride – 3D or visit Springfield, home to The Simpsons, to take an intergalactic spin on Kang & Kodos’ Twirl ‘n’ Hurl. With an upgraded park-to-park ticket, guests will have the opportunity to visit Universal Orlando’s second theme park, Islands of Adventure, and enjoy award-winning attractions like: The Amazing Adventures of Spider-Man, The Incredible Hulk Coaster and more.

For more information and a full concert listing, visit www.universalorlando.com/mardigras.

Florida residents can take advantage of this current special offer:

Guests outside Florida can take advantage of this current special offer: