You are at:Home»2014 Holiday Gift Guide»Glade for the Holidays

Everyone has heard of Glade, but have you smelled their holiday scents?

There are high priced companies, whose scents don’t last as long as Glade. 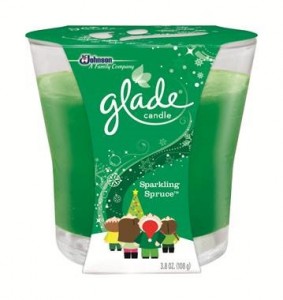 I suggested my mother in law buy the Glade Tart Warmer Melts, and she’s in love with them as well.

Their candles are amazing.  They last for hours on end, and make the entire house smell so sweet.  I received the Glade Sparkling Spruce and now my house smells just like a Spruce.

Glade makes all sorts of fragrance products, including spray, wax melts, and candles.  As well as, plug ins and refills.

The Hot Cocoa and Mint smells so yummy.  I plugged it in in the living room, and it’s a delight.  My son can’t get hurt on it, because it stays cool, which is a great investment.

I always put up Mistletoe, every year.  So when I saw Under the Mistletoe, I had to get it.

Merry Citrus Melody is another choice for scent.  It does smell citrusy, which I’m not into, but if you are, it’s the scent for you.

These scents are so great.