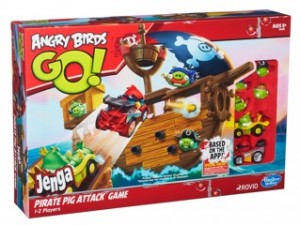 He’s created his very own pirate ship and is thrilled. Now he did get a little frustrated trying to put the ship together, but he was determined and suceeded. Similar to the game Jenga, you build a priate ship, then you use cannons, cars, ramps and the Angry Birds to knock it down! The kids had a blasy! This game is designed for 2 or more players and is perfect for grade-school-aged.

Niko has began collection Angry Birds games by Hasbro and he said that this one is one of his favorites!

“Arr, matey! The popular Angry Birds app comes to life in this epic Pirate Pig Attack Game! Can you triumph in this fast-crashing game? Launch your bird to take down the dastardly pirate ship and topple the swashbuckling piggies on their perches! Load your kart and target the pigs just right with your launcher. When you take out the pigs’ sailing vessel, you’ll become the feather-flying champion of the Pirate Pig Attack Game!

Hasbro and all related terms are trademarks of Hasbro. Jenga is a registered trademark of Pokonobe Associates.” And the ANGRY BIRDS GO! from Rovio Entertainment coming to mobile platforms on December 11th. 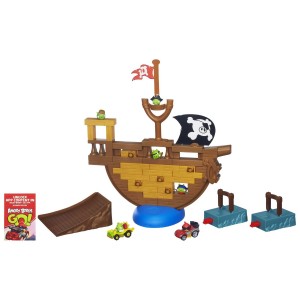 Hasbro has been generous enough to offer one Lucky Mom Blog Society reader a chance to win a Angry Birds Go! Jenga Pirate Pig Attack Game! Simply click the image below to enter via the Rafflecopter. GOOD LUCK!

Amazes me how much Angry Bird stuff is out there.

My two boys love angry birds. It never gets old.

This looks like a really fun game! We love angry birds 🙂

my 2 nephews would love angry birds thanks for the giveaway

My 8 and 6 yr olds are angry bird nuts!! (Ill admit I beat the first 3 games a few yrs ago on hubbies iphone)Looks like fun.

My 2 grand sons would love playing with these

My boys would love this because it includes a ship.

this would be great for my angry birds obsessed nephews

My kids love angry birds. This would be such a fun gift to give them.

This looks like so much fun! My boys would love it.