You are at:Home»Parenting»With the 5Cs, Your Kids Will Tell Themselves to Behave. #3: Consequence

Smiles & Frowns is a positive behavior app made by parents, for parents, and we hope on our “5 Cs” of success can make a difference for you this summer. Get it for free on your iPhone or iPad now!

Let’s face it. We all need control.

We just do. As people, we need to feel like the things we do matter and get results. And for little people, who are actively figuring out how the world works, that goes double. If a kid can make a choice, do something and then experience a clear result of their actions – a clear consequence – then they can start learning to control their behavior.

That’s why Consequence is the third our 5Cs for success.

And with Smiles & Frowns, consequence boils down to one simple formula: Smiles – Frowns = Rewards-Buying Power. That’s basically it. 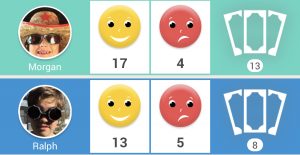 What’s nifty about this is that it’s simple math that even a five-year-old (or a 35-year-old) can get. And more than that, it’s an equation they can start owning for themselves almost immediately.  “If I earn more Smiles and have less Frowns to take away, I’ll have more Smiles left to spend. I guess I’ll do that!”

In a way, it allows them to give themselves positive reinforcement. They are in control. They can give themselves more good things by choosing more good behavior. That’s sort of the magic of Smiles & Frowns. And it’s right there in their row on the home screen: their name, the number of Smiles they’ve earned, the number of Frowns they’ve earned, and the consequence of their behavior, in terms of the rewards buying they have left.

Now again, I’m just a dad. I would never pretend to talk about the psychological underpinnings of consequence in the human mind. But there are three things I’ve learned that might help unlock the idea of consequence a little more other parents.

Thing 1: Consequences. They’re not all bad, and not bad at all.

The elephant in the room is that the very word consequence itself seems to mean a punishment or a penalty, so it it’s natural to shy away from the idea a bit. But that really couldn’t be farther from the truth. Praise, encouraging words and Smiles are consequences of good behavior, just as a Frown or a stern voice are consequences of bad behavior.

So we just need to embrace the whole idea of consequence as a positive. After all, an ice cream cone on a sunny afternoon after you kid has cleaned his room and emptied all the trash? Yes, that’s a consequence, and a tasty one, to boot. 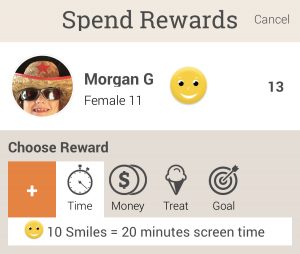 If fact, you can even Collaborate (another one of the Cs!) with your kids to create the rewards they want, which gives them even more ownership of their behavior. We’ve broken all possible rewards into four categories – Money, Treats, Time and Goals – so it’s very easy to create the exact kind of positive consequences that will really motivate them.

It when behavior happens and there is NO consequence that the trouble starts.

Thing 2: It all boils down to the ABCs: Action Begets Consequence.

This is an old adage that a friend of mine always says (thanks, John!) and it’s one you may want to repeat to your kids on a regular basis. “ABC, my dear. Actions Begets Consequences. You burped the alphabet at 120 decibels. Again. So now you earned a Frown.”

It all comes back to control, and really is the key to a kid starting to own his or her own behavior. When their actions have clear and predictable results, the light bulb goes off.  ABC, my dear, ABC…

Thing 3: With Consequence, you’re not the bad guy. (How nice is that?) 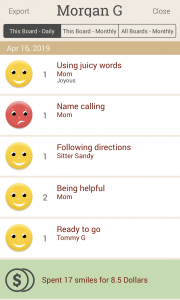 With Consequences in Smiles & Frowns, it’s all just math. Kids take control, because they just get it.  “Okay, more Smiles and less Frowns means more of the rewards that I want. It’s my choice and I can control it. I want that allowance money. I want those M&Ms. I want to feel proud. I can do this.”

Suddenly, it’s not about Mean Old Mom and Dumb Dad. It’s your kids about starting to take control to get the good consequences they want.

Good luck out there!

Get the Smiles & Frowns iOS app for free!

Next week, it’s on to Collaboration, and how we hope Smiles & Frowns can turned good behavior into a great conversation that really works for your family.

Previous Posts in this Series:

Two Dads, One App and the 5Cs of Great Summer Behavior. #1: Clarity

Previous ArticleTips for Starting Your Own Health and Wellness Company
Next Article Taking Care of Your Senior Parents: Three Important Steps

Such a great point. Consequences can be good or bad! I found when they enjoy good conveniences resulting from being good they’re more apt to repeat it in the future.