You are at:Home»Holidays»Fathers Day»This is What Happens When You Take Dad On a Father’s Day Shopping Trip!
0shares

Father’s Day is June 19th and every year I go out with the kids looking for the perfect gift for dad. But not this year! This year I decide to do something different, I decided to take dad shopping for his own gift. I mean, why not? It’s hard to buy for dad. Taking him shopping for his own gift means he gets exactly what he wants! When I presented my hubby with the shopping options, I asked if he wanted to go to the Mall and look around. But nope, he wanted to go to Sears. Which I should have known because he loves Sears and the Craftsmans tool section. Which is fine by me. I just wanted Carl to get a gift he wanted, rather than something we “thought” he wanted. And honestly, it was fun. I enjoyed watching Carl act all silly on his Sears Shopping Spree and we have already decided we will do this every Father’s Day from here on out.

I wish Sears sold bulk candy, If they did, I would have taken Carl over to the candy section to get a picture of him “acting like a little kid in a candy store”! Next time for sure!  From the moment we walked into Sears he reminded me of a kid, and it was really enjoyable to watch! First, he pointed out a few cool Father’s Day signs like this one: 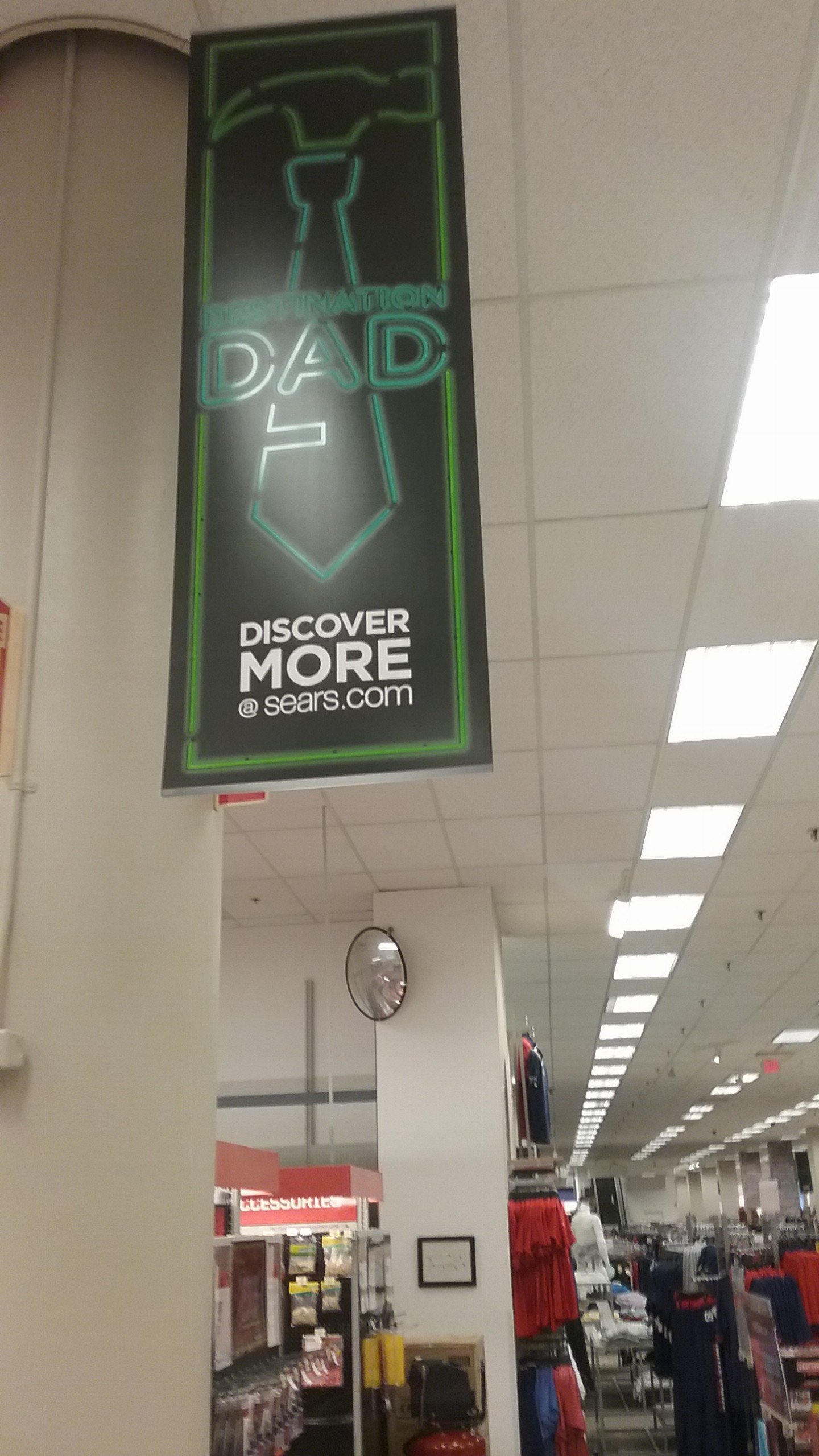 Next, we strolled throughout the men’s clothing selection looking at shirts since he mentioned he wanted a few shirts. I was amazed at the wide selection of shirts, to be honest. As a rule, I don’t shop in the men’s section at Sears. But wow, they have a nice selection of men’s clothing. I was impressed. Carl loves polo and casual. Of course, he didn’t buy the shirt, he was just acting all silly on his shopping trip. I love this man! We’ve been together since high school and he still makes my heart skip a beat. 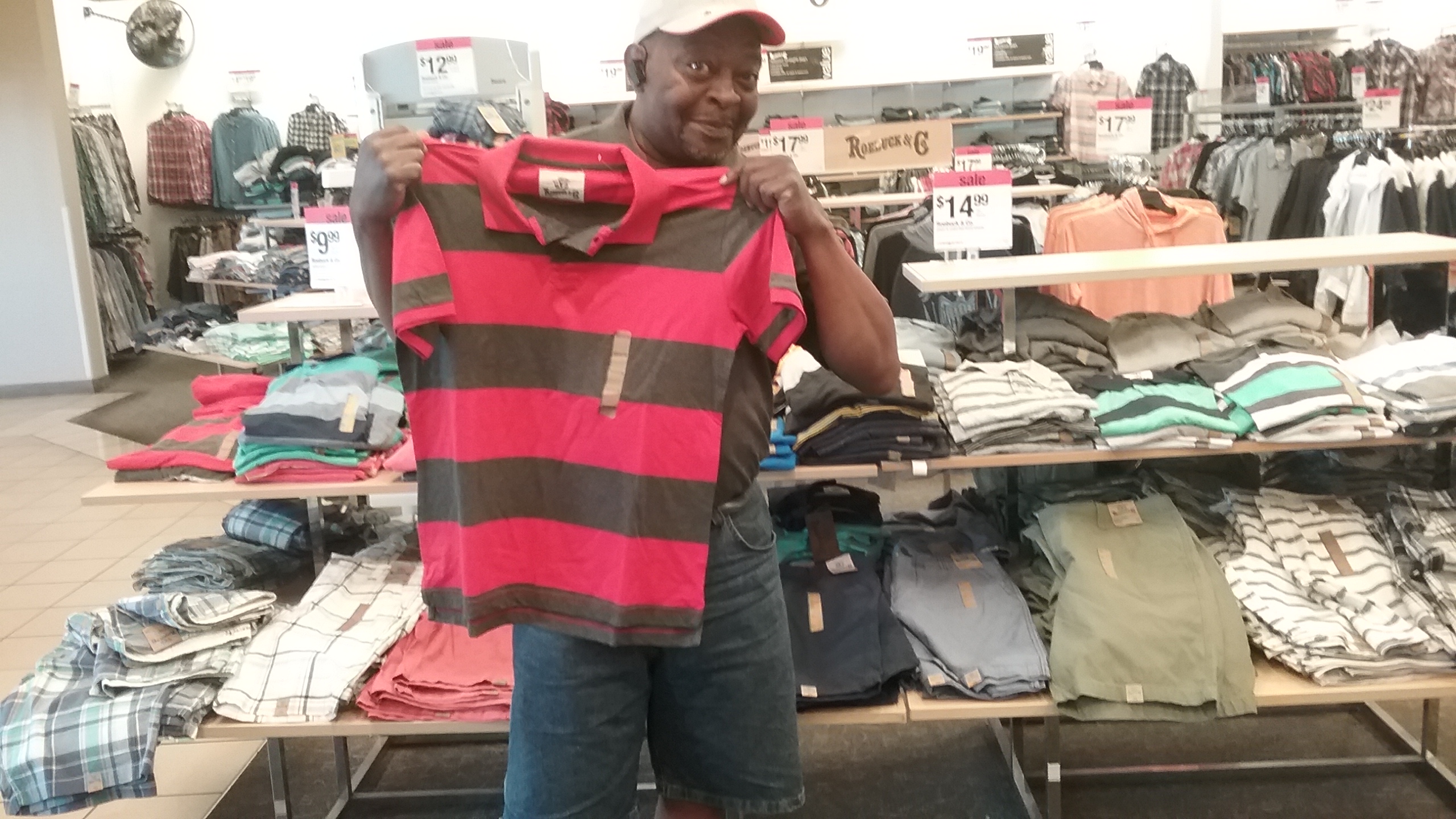 I love how happy Carl looks on the treadmill. He’s such a silly man. But again, he was just playing! While he has been talking about purchasing a treadmill for the last few months, he decided he’d rather have something else for Father’s Day. Or, maybe he’s paying me back for all the shopping trips I’ve dragged him on over the years by dragging me to every department in the store. Hehe, I bet he secretly was. 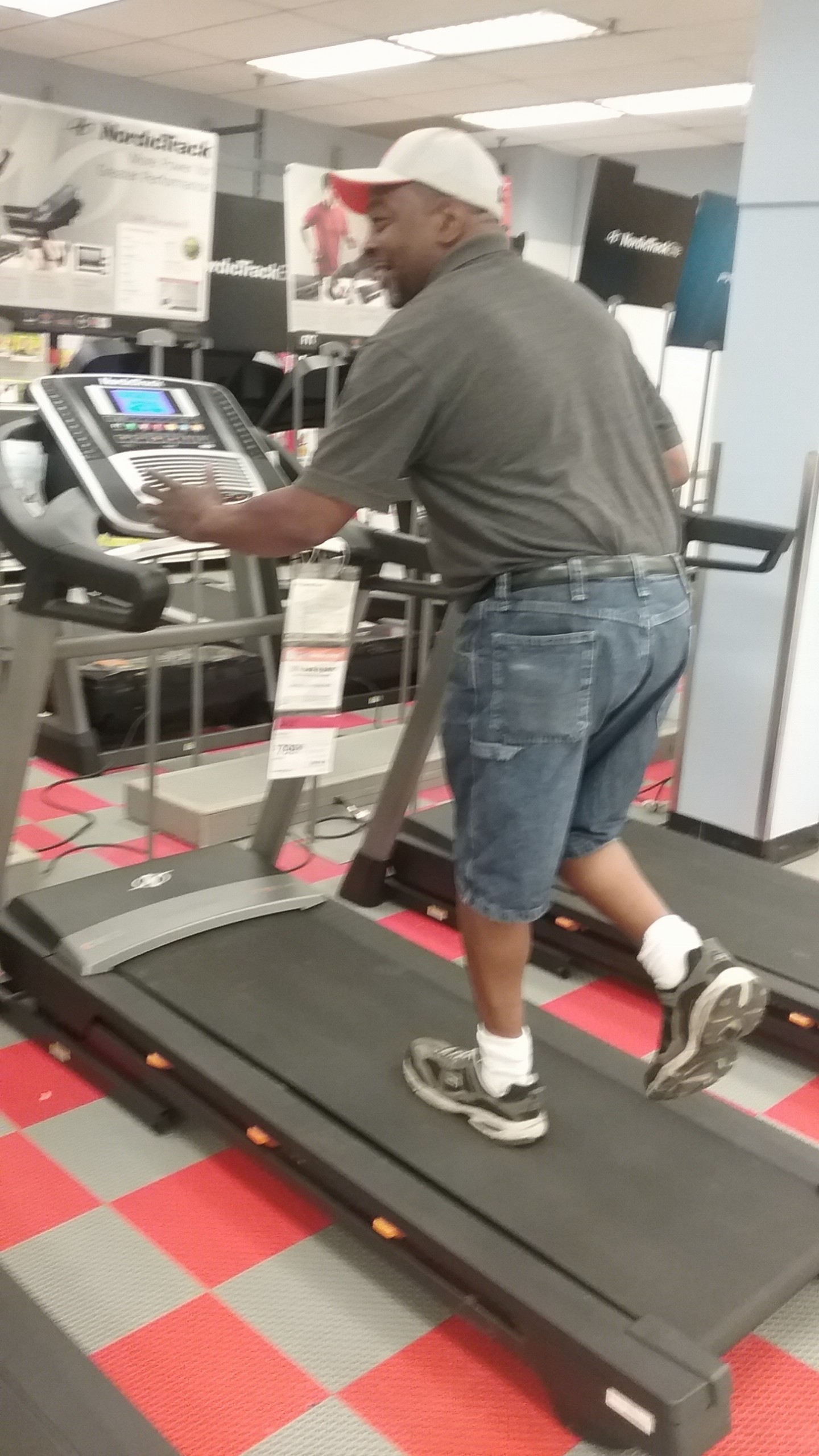 I couldn’t believe he stepped  on that treadmill and posed for a picture for me. He caught the attention of a few shoppers who got a chuckle of out watching Carl act all silly. They too even said that the “tredmill would be a great gift for Father’s Day”. But of course, he wanted to pass, I guess that wasn’t his favorite thing right now.

After playing for the next thirty minutes in the exercise department I asked Carl if he wanted to look at the tool section. I swear you could see the sparkle in his eyes, and for a moment, I thought he was going to the Carlton Dance and really embarrass me.

Of course, on our way to the tool department, Carl spotted the one thing his heart truly desires! And then, of course, he has to do the “puppy dog” look.  But check out this awesome Kenmore 4 Burner Stainless Steel Lid Gas Grill with Storage….WOW it’s nice! Ok, “TOP SECRET INFORMATION”. I sent my son back to Sears to pick up this amazing grill for Carl. Yay, we got him a surprise! I can not wait to see the look on his face when he wakes up on Fathers Day and see his new stainless steel grill! 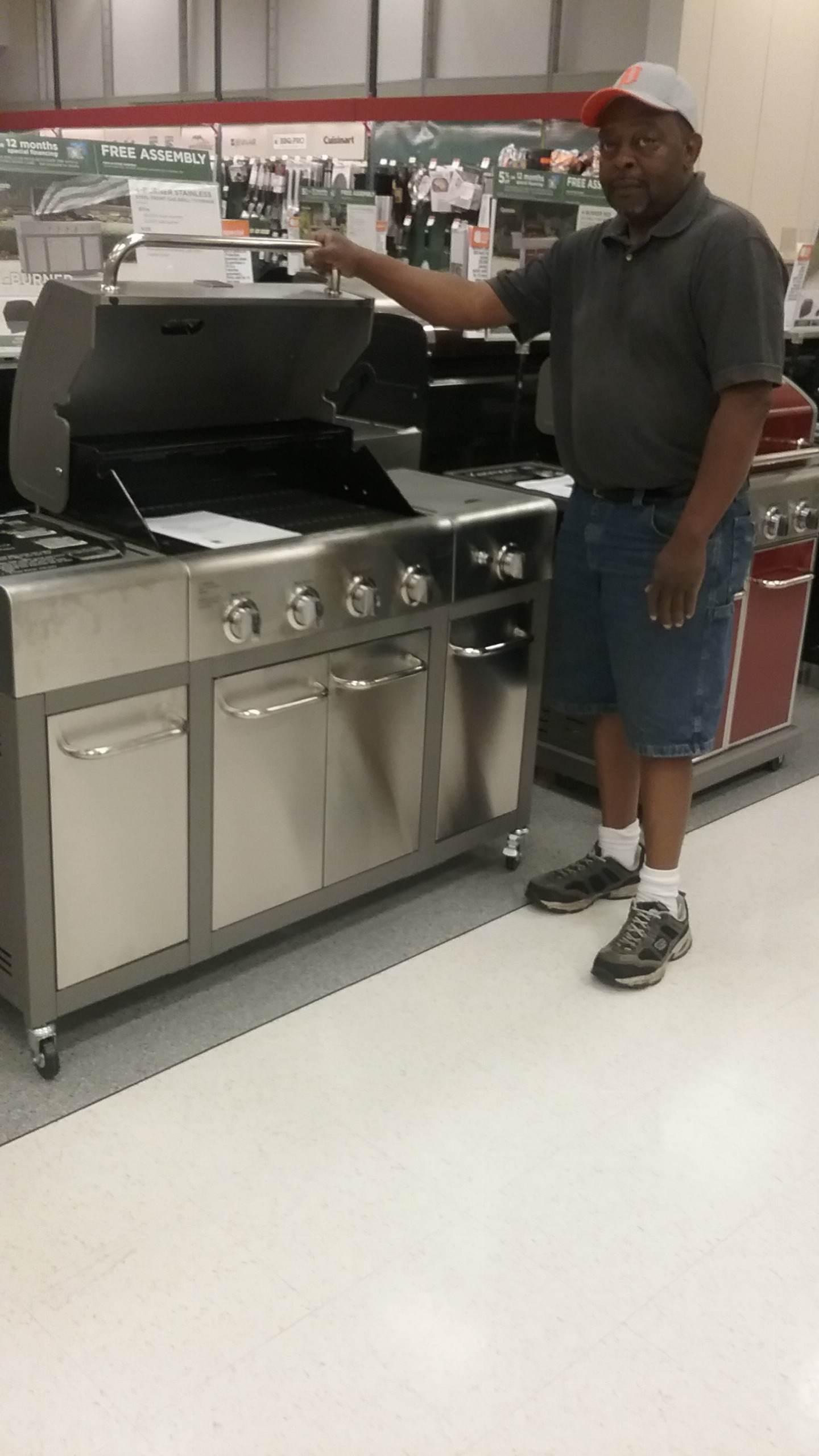 Well, after looking throughout Sears he finally decided to get a pair of Levi’s Jeans and a DeWalt Deep Socket set he looked at earlier? I was shocked, but like he has always said, “I’m just a simple man dear”. 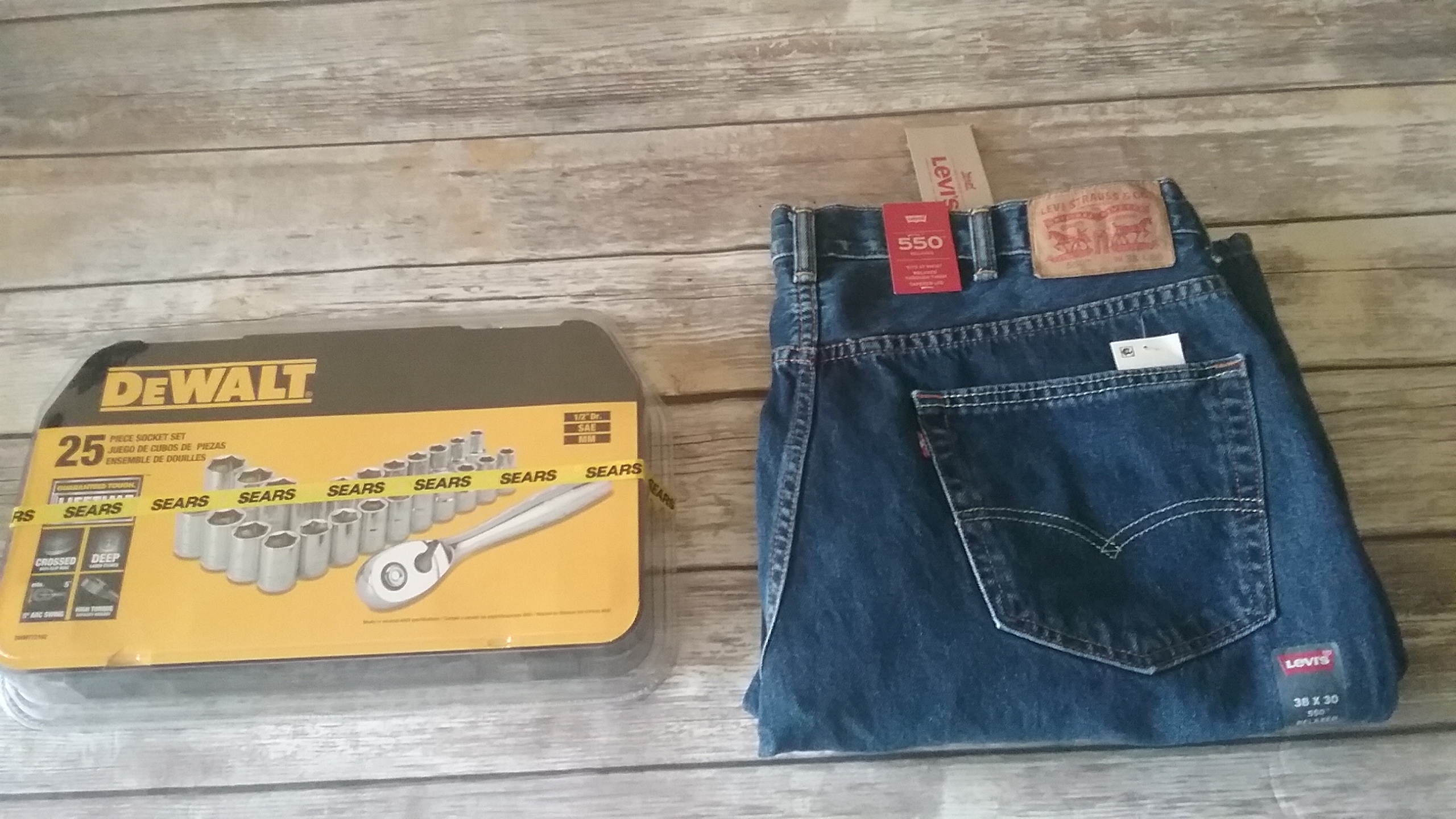 I don’t know about any other Dad, Uncle, Brother or Husband but my husband was so happy to shop at Sears. With their wide selection of tools, clothing, gym and weight, lawn and garden accessories dad is sure to be inspired by something he sees at Sears. And, during the June 12 Member Private, members will receive great deals on items with an extra 10-15% back in points; and an extra 5% back if members purchase using the Sears app…so potentially an extra 15-20% back in points!

So don’t wait, visit your local Sears or Sears.com to see what your Father, Husband, Uncle, Brother may enjoy having for Father’s Day, hey they too may be dancing like Carlton! #DestinationDad #ad @Sears.
Sears has been generious enough to offer one lucky Mom Blog Society reader a chance to win a $100 Sears Gift Card to take dad shopping for Father’s Day. For your chance to win, simply enter via the Rafflecopter below. GOOD LUCK!
a Rafflecopter giveaway