You are at:Home»Education»The Secret to Learning French

My high school offered a ton of foreign languages that most other schools don’t offer. Granted, I talk about high school as if it was just a couple of years ago. I FEEL like it was just a couple of years ago. Alas, my oldest child is now in high school, and the difference between what he is learning and what I learned is miles apart. While I took four years of Latin when I was in school because I was a dork, kids today are taking a language they will use in their everyday lives.

Wait. That didn’t come out right. Yes, Latin is a useful language. It has given me the tools I need to be spectacular at Words With Friends. It has also given me a unique edge on understanding English roots and vocabulary. One thing I learned in Latin is that there are roots in a lot of different Romance Languages, including French.

My son decided to go against the grain a bit, just like his mom did in high school. Where most of his classmates were taking Spanish, he decided to take French. It was fascinating to hear him learn the language in school and compare what he was saying with the remnants of Latin that I remember from so many years ago. I’m not going to say exactly how many years ago because that would be telling. But I digress.

Something that hit me HARD as we were comparing what he was learning with my knowledge is that foreign language in schools is taught based on structure of the language. Kids may learn to write a sentence that is grammatically correct. Yet they don’t really learn how to speak a language fluently. If you REALLY want to know the secret to learning how to speak French, you need to immerse yourself in the language.

Case in point: many moons ago I worked at an apartment complex where one of my favorite residents and good friend was fluent in Spanish. She married a man who spoke only a few words of English. She was born and raised in the United States, and had never taken a Spanish lesson in her life. She learned the language when she moved to Mexico with her husband when they were first married. She became immersed in the culture and the language. The result was fluency that is unlike anything you can get in a traditional language lesson plan.

The good news is that you don’t have to move to France to learn French. You don’t need to send your kids to Paris for years to have them learn the language. Instead, Whistlefritz offers language learning that is different from traditional French lesson plans. It offers a unique form of immersion for children (and adults!) with interactive and fun ways to engage. The result is fluency in language that will have your kids speaking French almost as if they are natives. 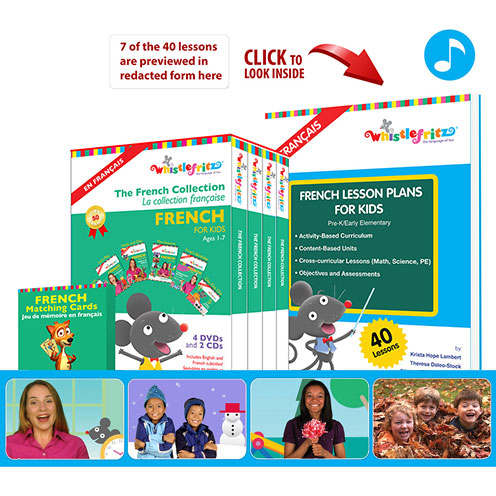 Whistlefritz offers two different languages at this time. Both Spanish and French are available with full lesson plans for parents and educators. The full programs come complete with DVDs, worksheets, CDs, and a number of different ways to keep learners engaged and interested in what they’re learning. What’s more, kids can learn French without even realizing they are learning!

Kids brains soak up language differently than adults do. Immersion for kids can get them speaking and understanding French or Spanish in a way that is almost second nature. Think about how babies learn to speak and form words. They soak up what is going on around them and develop language skills as part of the development process. As we get older, it becomes more difficult to learn another language because our language skills are pretty much hard-wired into our skulls. It’s definitely not impossible, but it’s certainly more difficult. Whistlefritz uses the way kids’ brains are wired for language to make learning French as easy as learning how to read or ride a bike. And you can do it all without having to send them off to Paris to learn the language!