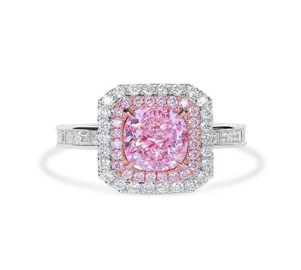 The Mystery Of Pink Diamonds

Pink diamonds were first discovered in India during the early 17th century, in the Kollur mine within the Guntur district of Andhra Pradesh, which was part of the legendary Golconda kingdom

Since their discovery, pink diamonds have not only been some of the rarest diamonds, they have also been the most mysterious.

Pink diamonds are some of the most valuable diamonds on the market. However, their natural pink colour was a mystery to scientists for many years.

Extensive research was carried out on the rare gem, and it was later discovered that pink diamonds seemingly had no impurities in them.

You see, most coloured diamonds get their colour from chemical impurities that absorb light.

However, Pink diamonds don’t seem to have any impurities in them at all.

Scientists began to speculate that maybe their colour was the result of some kind of seismic shock that altered the stone’s molecular structure.

In 2017 the mystery of the pink diamond was put to bed by PhD student Keal Byrne and his team.

They discovered that the pink colour was due to a natural occurring slippage of the crystal lattice entering the stone while it is forming deep within the Earth’s crust. 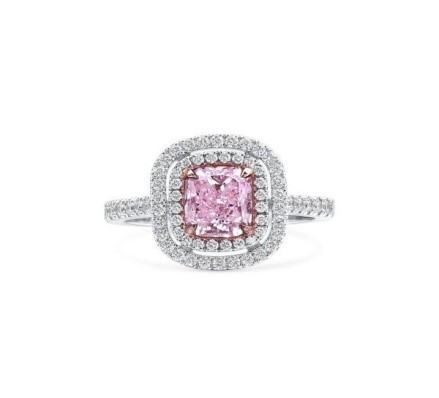 The Epitome Of Luxury.

Because of the very limited supply, pink diamonds are recognised as extreme luxury items, they are the crème de la crème of diamonds.

After their discovery in the early 17th century, pink diamonds have since been mined in Brazil, South Africa, Tanzania, Canada, Australia and Russia.

That being said, pink diamonds are so rare. In fact, they are the second rarest in the coloured diamond family.

The Argyle mine in Kimberley, Western Australia, is responsible for nearly 90% of the world’s pink diamonds.

And for every one million carats of rough diamonds mined at Argyle, only one carat of pink diamonds are suitable for selling.

Which means only 1% of the Argyle mine’s output is pink diamonds.

Pink diamonds are literally one in a million.

As a result, pink diamonds are some of the most expensive gems on the market.

Even low quality pink diamonds will cost you a pretty penny.

Unlike colourless diamonds, the clarity of the gem doesn’t affect its price.

That is because they are formed by a deformation of their lattice structure, which makes high clarity pink diamonds almost impossible to find.

Pink diamonds are a luxury anyway they come. 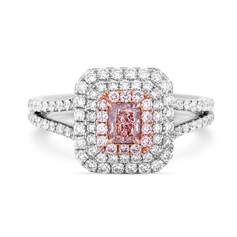 Pink diamond shades are graded according to each diamond’s colour intensity.

However, the process of evaluating a Pink diamond’s intensity can be difficult, as each fancy colour grade isn’t simply a point along a line: each grade is a range in itself.

Their uniqueness can be seen through the shade of pink that is visible in each stone.

Even though the ideal pink diamonds are the ones with the most intense and purest colour pinks.

Pink diamonds sometimes have secondary colours on top of their main tone.

Some of the secondary colours found in  pink diamonds are purple, brown or orange. 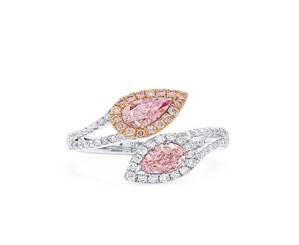 The Pink Legacy- The Rarest Diamond In The World

The Pink Legacy diamond is one of the rarest diamonds in the world.

The saturation and the intensity of the pink legacy diamond qualifies it as a “fancy vivid” diamond, which is the highest level of colour intensity a coloured diamond can have.

The pink legacy diamond weighs 18.96 carats and has been dubbed the “Leonardo da Vinci of diamonds.”

Finding a pink diamond that size and  with that level of intensity is unbelievable, which is why the pink legacy diamond is such a marvel.

The Oppenheimer family, who built De Beers into the world’s biggest diamond trader, famously owned the one of a kind  jewel for years before it was auctioned.

Pink Diamonds Are No longer  Being Mined

Australia’s famous Argyle Mine, which has mined 90% of the world’s pink diamonds since 1983, officially closed its operations due to the COVID-19 pandemic.

Even though Argyle pink diamonds will no longer be mined, for the foreseeable future, there will still be inventories of the one of a kind stones available for purchase.

However, with the Argyle mine being closed, pink diamonds have become even more precious, as a result the value of the diamonds has steadily increased.

Thus making it a worthy investment.

Many wealthy jewel collectors, high net worth investors and celebrities  are scrambling to get their hands on one of these pink diamonds before they become even rarer.

Your blog provided us with valuable information to work with. Each & every tips of your post are awesome. Thanks a lot for sharing. Keep blogging,
singapore online bet