A FILM BY JEN MCGOWAN 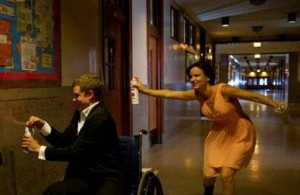 Directed by Jen McGowan, KELLY & CAL tells the story about two disaffected people who find an irresistible connection to one another.

Pulled between adolescence and adulthood, Kelly (Juliette Lewis) is a punk-rocker turned suburban mom nostalgic for a life she can no longer have and uncertain of a future she doesn’t yet fit in. Seventeen-year-old Cal (Jonny Weston) is frustrated at his lack of control over the hand he’s been dealt. When the two strike up an unlikely friendship, it’s the perfect spark needed to thrust them both back to life. Their electric relationship thumbs its nose at the world, laughing at the suburban absurdities that surround them. The ridiculous and the sublime. A balance too delicate to continue.