You are at:Home»Entertainment»I’m headed to LA and Disneyland! 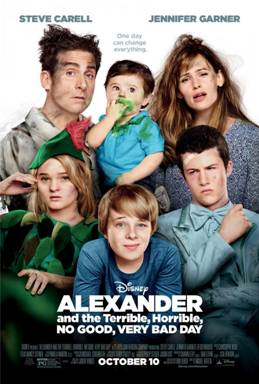 This week I’m headed to LA and Disneyland along with 25 other bloggers. I will be catching a sneak peek of “Alexander and the Terrible, Horrible, No Good, Very Bad Day” #VeryBadDayEvent! and interviewing the cast! Including Jennifer Garner, Steve Carell,  Dylan Minnette, Bella Thorne, Kerris Dorsey and Ed Oxenbould,

And to sweeten the deal even more, I will also be attending an advance screening of STAR WARS REBELS: SPARK OF REBELLION, AND meeting Freddie Prinze Jr., Taylor Gray, Tiya Sircar, VanessaMarshall, and Executive Producer Dave Filoni.

In addition to the fabulous interviews and screenings I’ll also be taking an exclusive tour of Walt Disney’s Estate! Followed by a behind the scenes tour of the film making of SLEEPING BEAUTY and MALEFICENT,PLANES FIRE AND RESCUE.

And finally, I’m going to Disneyland again! It’s fall and Halloween season and Disneyland will be decked out accordingly! I can’t wait to spend the day site-seeing and riding their magical rights. I feel like a kid just thinking about it!

This is wonderful news.. I hope one day to be able to do this as well.. I would be estatic. Have a safe and fun trip. 🙂

I’ve always wanted to go to Disneyland! I’m hoping to some time.. And I so want to see that movie – for me – not even the kiddo..

This sounds like so much fun and magical! I also hope some day I am able to do this! That movie sounds like it will be a good one! Have fun in the magical kingdom!

I think the best part would be going behind the the making of the movies but then, the tour sounds fantastic also.

Oh what an amazing trip that will be. I’ve been to Disney World but never Disneyland. Maybe one of these days I’ll get there with my family. Have a great time!

Oh my gosh – this sounds like to much fun. I hope you have a fabulous time and I can’t wait to hear all about it and see wonderful pictures!

Best of Fun on your outing There is one in Orlando but I have not been in a while. Jerri

That is so exciting. We just went to Disneyland in June and had a blast! Great movie and great experience!

OMG you lucky gal I hope you have a blast… Bring me back something, hug the mouse, or something… For sure have loads of fun, we’ll be following along the whole time!

This sounds like so much fun! Have a great trip! I cannot wait to see the movie!

I hope you have a wonderful time. Sounds fun. Enjoy yourself and be safe.