You are at:Home»Parenting»Everything You Need to Know About Baby Shoes — And the Feet in Them

The only thing as cute as dimply little baby toes are the booties that keep those toes warm. Those booties and other soft footwear are fine while a baby is still crawling, but once she miraculously stands upright and starts walking, it’s time to get her first pair of shoes.

For one thing, toddlers tend to have a wobbly gait, and shoes provide traction and help them avoid slipping and sliding while they’re getting the hang of locomotion on their own two feet. For another, they protect those little feet from foreign objects and the elements.

It’s estimated that from the time she takes her first step, your child will walk the equivalent of four times around the earth in her lifetime. Talk about wearing out a Fitbit! That’s why it’s important to start her out right so her feet grow strong and healthy.

Each of our feet has 26 bones, and both feet together comprise about a quarter of all the bones in the human body. Along with those bones, each foot has 33 joints, and more than a hundred muscles, ligaments, and tendons that tie everything together and allow them to work in unison. It makes for a remarkable job of engineering that allows us to balance, curl and point our toes, walk, skip, run, dance, jump and land again without breaking anything.

The bones in a newborn’s feet are not fully developed and are still mostly cartilage. As a baby grows, the cartilage begins hardening into bone, but it isn’t until the teenage years that feet are fully developed. It’s important to recognize that because babies’ feet are soft and flexible they’re also more readily vulnerable to damage. Too much pressure on their feet over time can actually change their shape, so even socks need to be large enough so they’re not constricting.

Babies’ feet are chubby and they’re proportionally wider than adult feet because they don’t have the kind of arches that yours do. Their feet are flat because there’s a pad of fat where the arch should appear. The arch generally doesn’t become apparent until children are about two-and-a-half years old and their foot and leg muscles have developed enough to support their arches.

What you want to do is give little feet and toes room to wriggle and move around so muscles begin developing and get ready for standing and walking.

While some babies stand up and take their first steps when they’re about one year old or even younger, the average age is about 18 months. They’ll usually start exploring around themselves by crawling when they’re 6 to 10 months old, but some babies decide to bypass that stage entirely and go straight to pulling themselves up and trying to walk. Some will begin by what’s known as cruising, supporting and steadying themselves by leaning on furniture as they make their way to where they’re going. Hey, whatever works!

When babies are starting to walk around in the house, being barefoot is a good thing because it allows free motion of the feet and toes and builds strong muscles and ligaments, especially if there’s carpeting for toes to grip. If floors are wood or tile, or it’s cold, socks will do the trick as long as they’re not slippery.

But when a child is ready to walk outside, it’s time to go shopping for shoes. 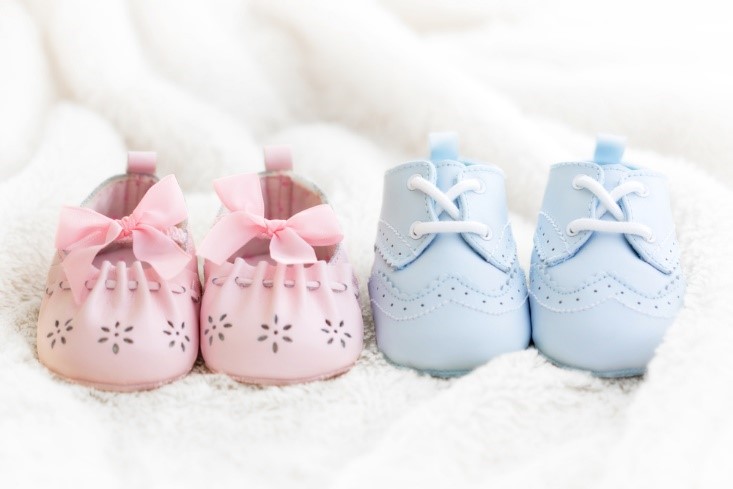 While shoes for baby boys can be darn cute, you can simply lose your mind over baby girl shoes. Just like puppies, you’ll want to gather up and hug everyone you see. But a little restraint is in order because toddlers outgrow their shoes every two to three months. From ages two to three, they grow out of their shoes every three to four months, and from three to five years old, their feet can grow one-half size every four months or so.

When a child is starting to walk, but actually at every age, it’s important that shoes are lightweight and flexible. Look for shoes made of soft leather and breathable fabrics. No matter how adorable they are, shoes have also got to fit properly to avoid creating foot problems. Size charts don’t tell the whole story, though, because fitting includes not only length but also width, depth, and shape to match your baby’s feet.

In generations past, parents would bronze their baby’s first shoes so they could keep that moment in time. If that thought appeals to you, there are still companies that provide that service. Otherwise, you probably don’t need to be told to take a lot of pictures!