You are at:Home»Entertainment»Doc McStuffins School of Medicine Programming Event beginning 9/22 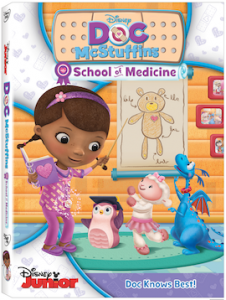 “Doc McStuffins,” the Emmy-nominated animated series about a little girl who can talk to and heal stuffed animals and toys out of her playhouse clinic, models compassion and good health for kids age 2-7 and has been lauded for its strong storytelling that provides a role model for girls and boys all over the world.

“Doc McStuffins: School of Medicine,” a programming event featuring back-to-back episodes of the hit series and interstitials with real-life health professionals in the fields of medicine, dentistry and emergency response will air MONDAY, SEPTEMBER 22 – FRIDAY, SEPTEMBER 26 (9:00-10:00 a.m. ET/PT) on Disney Channel. The highlighted medical professionals in the interstitials each have specialties that mirror those of Doc’s from the morning’s episodes.

Showcased in the interstitials are two members of the Artemis Medical Society, women physicians of color who formed their group after connecting over “Doc McStuffins” – Dr. Letitia Bradford, an orthopedic surgeon in California’s Salinas Valley; and Dr. Angela U. Tucker, a family medicine practitioner in Columbus, Ohio. Also featured in the interstitials are dentist Dr. David Kang and nurse practitioner Bill Kenny, both of Children’s Hospital Los Angeles; and Christian Sequeira, a Los Angeles-based Emergency Medical Technician.

On Tuesday, September 9, Disney Studios will release a “Doc McStuffins: School of Medicine” DVD with an exclusive “Doc McStuffins” dress-up playset featuring Doc in her different specialty outfits. Beginning Friday, September 12, WATCH Disney Junior will launch over 30 microgames focused on different doctor specialties for kids to play and earn their own “Doc McStuffins: School of Medicine” certificate. A preview of the new episode “Doc’s Busy Day/Wrong Side of the Law” will also be available for verified users.

Created and executive-produced by Humanitas Prize and Emmy Award-winning Chris Nee (writer on “Little Bill” and producer of “Deadliest Catch”) and directed by Emmy-winning Norton Virgien (“Rugrats”), “Doc McStuffins” is a production of Dublin, Ireland’s Brown Bag Films in association with Disney Channel. The Hollywood Health & Society division of the USC Annenberg Norman Lear Center serves as its health and medical consultants, advising on basic health issues that are relevant to young kids and families.

I am really glad to glance at this weblog posts which includes
lots of useful data, thanks for providing these kinds of
information.