I wanted to share with you about Emma’s and my trip to Orlando Florida.  We were there on behalf of Mom Blog Society who was invited by The Moms/doMAIN and Discovery Cove.  A Word of MOM Weekend was definitely great for making memories with Emma and an experience of a lifetime. 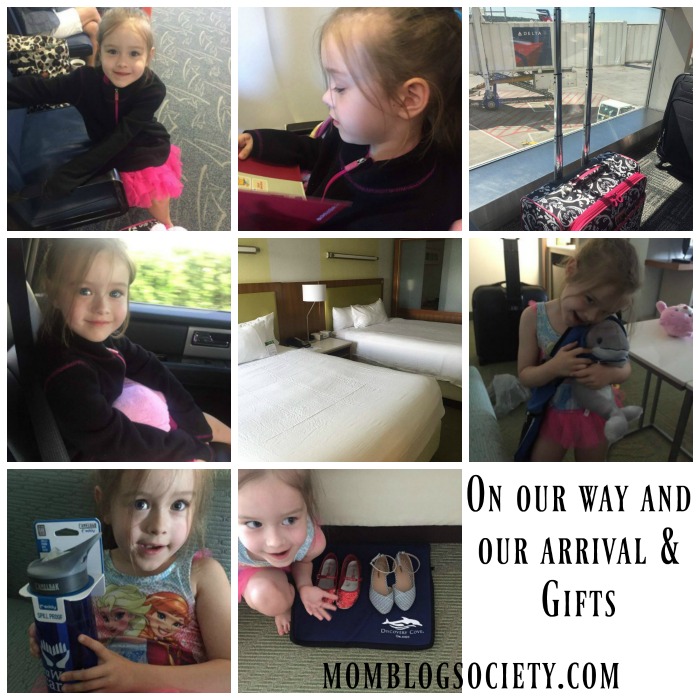 (Note: Emma thought the laptop holder was a mat for her shoes at the end of the bed).

We arrived Friday late afternoon to a beautiful room at Spring Hill Suites.  Emma was all excited because they gave us a bag of goodies when we came into the hotel.  Her most favorite was the Dolphin in a Discovery Cove sweatshirt, and the “doormat for her shoes” (ie: laptop holder). 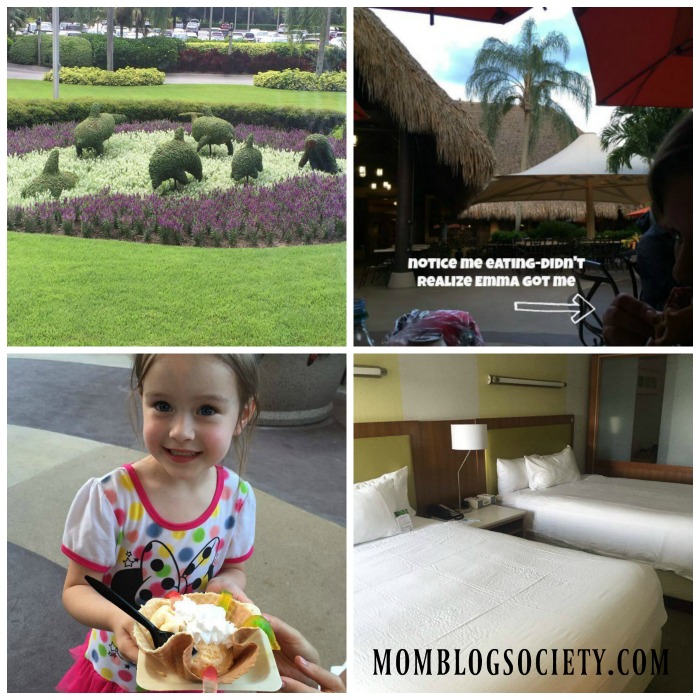 Emma and I met the rest of the group of bloggers, and their kids/families and were on our way to Discovery Cove for the evening and dinner. We learned about the curation of fish eggs from Denise Swider and had the opportunity to swim in the Grand Reef with FISH and velvety rays. Yes! you can’t imagine if you have never experienced this to swim with the velvety rays.  They actually all just mind their own business. During this time Emma exclaimed, “I found Dory”, as she spotted a blue tang.  Afterward, we swam out to Denise and she showed us how they curate their fish eggs while we stood there in the crystal clear salt water.

We had a nice Luau (is what it reminded me of) dinner which was very good. Emma’s favorite was making her own sundae and taking some pictures. 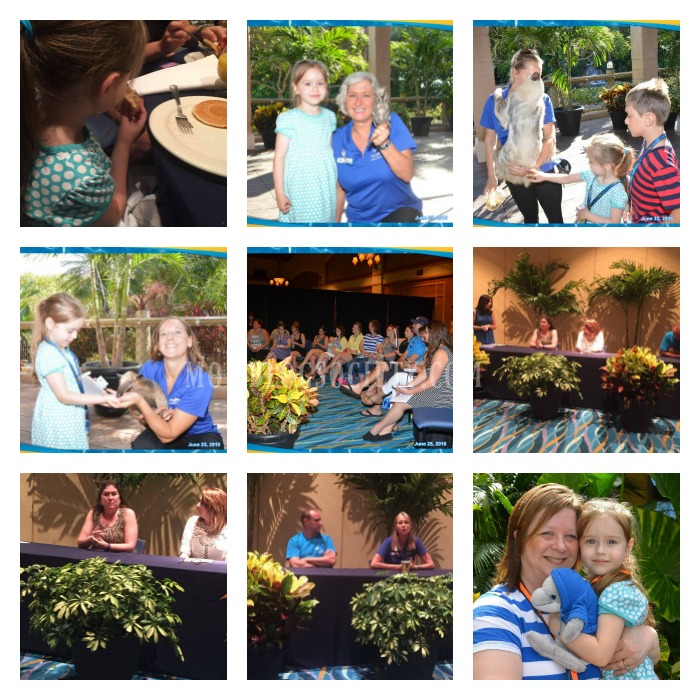 We continued our big adventure Saturday morning when we headed back over to Discovery Cove. We enjoyed a delicious breakfast then the adults had the pleasure of listening to a talented panel. I enjoyed listening to each panelist so I am going to try to tell you a bit about each one and what they do for their part in helping our oceans and freshwater fish and mammals/animals. 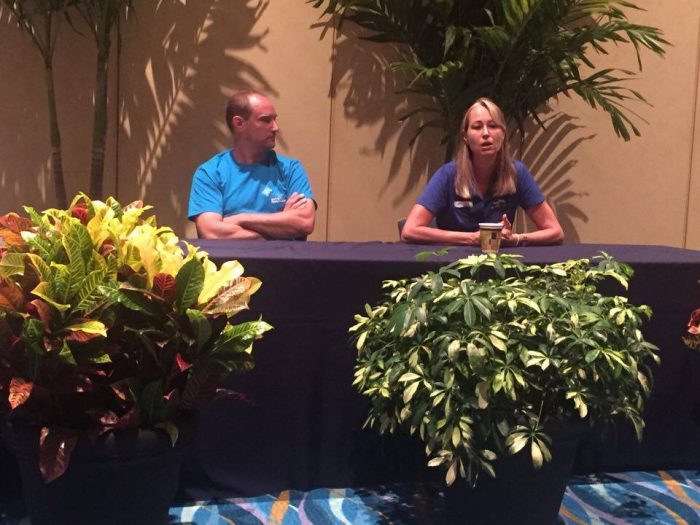 Mitch Carl (above left) is from Omaha, Nebraska and is now a curator of Omaha’s Henry Doorly Zoo and Aquarium.  He began his zoo career in 1997 and worked his way up to his current position.  His main ocean love I guess you would call it is coral. His most recent project was a labor of love to do a  complete renovation of the zoo’s aquarium.  He does joke that it took many years off of his life.

Mitch is very involved in SECORE (Sexual COral REproduction) project.  The SECORE project initially was started in the beginning to sexually reproduce corals in captivity.  Now the main focus has changed to save the endangered Acropora palmata as well as other corals of the Caribbean, through sexual reproduction.  With SECORE’s efforts over 5000 corals have been raised from annual coral spawn then have been replanted on the reefs of Curacao.

Coral reefs are dying
Tropical coral reefs are the most diverse marine ecosystems on earth, giving shelter to thousands of animal species. Many people depend on fisheries, tourism and coastal protection provided by healthy coral reefs.

Yet today, coral reefs are dying at an alarming rate, all around the globe.
Corals build the reef structure and provide the basis for a functioning coral reef ecosystem. Without corals, reefs will degrade and vanish within years.

Denise Swider (above right) has been a dedicated member of the SeaWorld Parks and Entertainment Zoological staff since 1993.  This past 20 years, she has worked with marine fish and invertebrates of all sizes and shapes.  Her current role is an Assistant Curator. She oversees Discovery Cove’s Grand Reef and the marine life that lives there as well as managing the SeaVentures helmet diving program.

Her time at SeaWorld has given her many memorable stories to share with the park’s guests which give them a better appreciation for the animals in the parks as well as their wild counterparts in the oceans.  One of her main loves is the Rising Tide Conservation program.  She also enjoys finding new ways that Discovery Cove can help in this very worthwhile conservation effort. Rising Tide and Discovery Cove started partnering in March of 2016 to support ocean reefs. You can read more about Rising Tide by downloading this informational paper Rising Tide Conservation.

Rising Tide Conservation is an initiative started by SeaWorld that promotes efforts to breed and raise marine tropical fish in aquaculture facilities rather than collecting them in the wild. Collection of marine tropical fish can cause damage to both the reef and the ecosystem it sustains.

Discovery Cove participates in the program by collecting and donating fish eggs that otherwise would not hatch and purchasing fish that have been raised through the program. The eggs that are collected are sent to partner laboratories in the program to be utilized in breeding research. 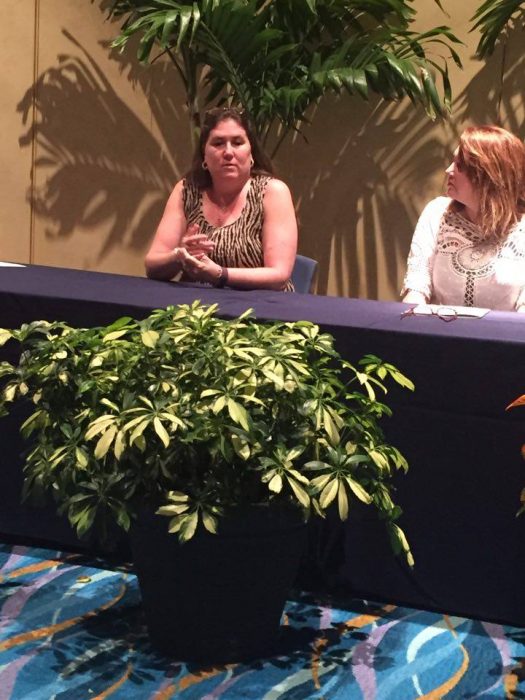 Paula Carlson (above left) is the Director of Husbandry at The Dallas World Aquarium in Dallas, Texas. I really enjoyed some of my time with Paula.  She always knew she wanted to work in Marine Biology since was a young child.  She can attest to dreams do come true if you work hard and focus on that dream.

She actually began her career at Sea World as an aquarist in 1986.  She spent five years at Sea World, then spent four years managing retail aquarium stores before she landed in 1995 at The Dallas World Aquarium.

Paula is an active member of the Association of Zoos and Aquariums (AZA) and also serves in a steering committee member and Vice-Chair of the Marine Fishes Taxon Advisory Group (TAG).   Her passions are sea dragons and sharks and has recently been invited to become a member of the IUCN’s Shark Specialist Group and the ICUN’s Specialist Group for Seahorse, Pipefish, and Strickleback.  She has been an aquarium hobbyist since 1970 and a certified diver since 1984.

During our panel discussion, the kids were entertained by learning about animals such as the screech owl, a sloth, and a few others. 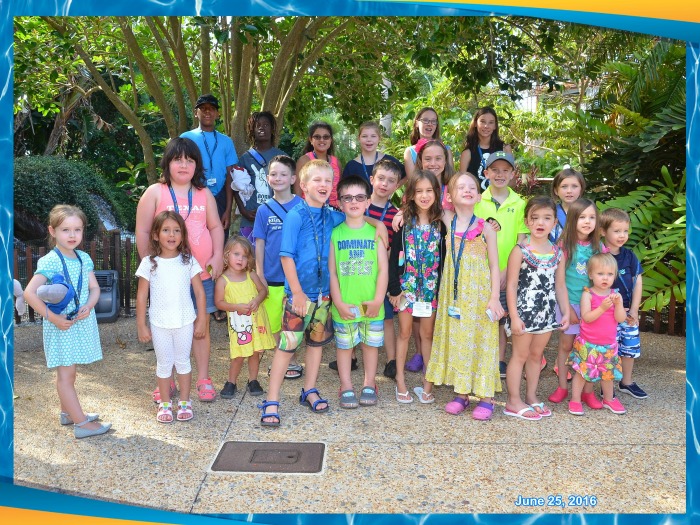 Then it was time to get changed and get ready to swim with the dolphins.  I have seen dolphins from afar, or at SeaWorld when I was younger but I have never touched one. We learned that most dolphins live long lives. The bottlenose dolphin can live over 40 years.  Emma and I had the opportunity to learn about the bottlenose dolphin. Here are some fun facts:

The reason that dolphins are lighter on the bottom of their bodies and darker on the top is for protection. They blend it with their surrounding from other sea life that are below them. When they swim near the surface anything that is looking from above their darker side blends in with their surroundings.  This helps protect them from danger.

Dolphins consume a variety of prey including fish, squid and crustaceans.  At Discovery Cove they are fed fish, jello cubes (these are gelatin and contain no flavor but quite a few that live there like them.)  They also enjoy ice cubes.

SeaWorld has started to do less theatrics with their dolphins and more teachable moments.  They inform their guests about the dolphins, as well as show how playful they are.  Dolphins have a personality and enjoy ‘talking’ and showing their agility and strength.

It is important when you touch or pet a dolphin to do it towards the middle of their back.  You do not want to startle them by getting right behind their eye area.  Their skin is soft yet tough and although they are strong, they are also gentle.

Dolphins use a blowhole on top of their heads to breathe.

Dolphins have excellent eyesight and hearing as well as the ability to use echolocation for finding the exact location of objects. 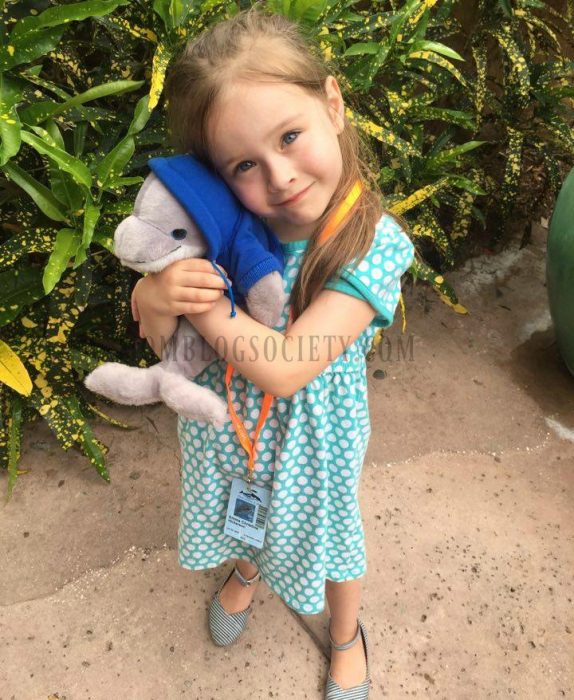 We enjoyed learning about the bottlenose dolphin, and then we were able to have a little individual time with them.  The instructor taught Emma how to hold on to the dolphin in order to safely glide along during her swim with him. We were also able to get a picture with Hutch, and Emma was even able to give him a kiss by laying one hand on top of the other. 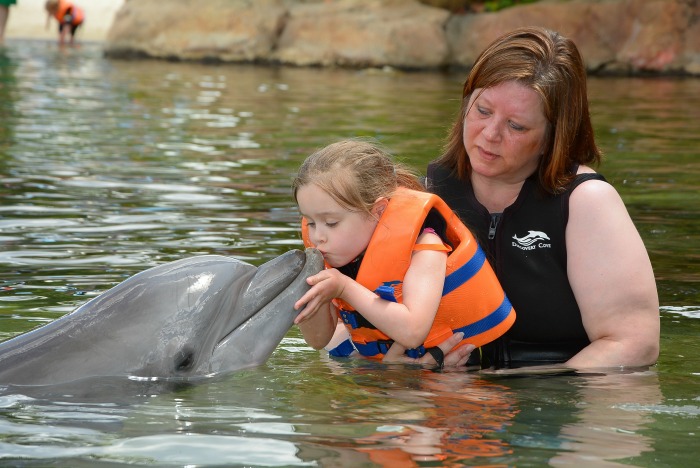 After our time with the dolphins, we had free time to enjoy going down the “Lazy River”.  Erica (from Mama on a Mission), her husband and I after doing it decided to call it the “Lazy not so lazy River”. Maybe because between the 3 of us we had 3 kids ages 6 and under. We swam under two different waterfalls and floated at times. 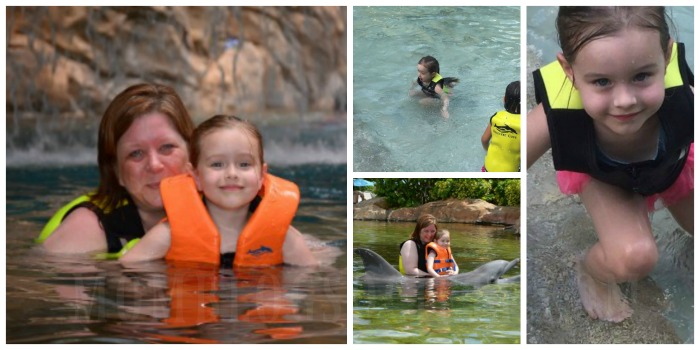 On our last morning in Orlando, we went to SeaWorld.  We had breakfast at Laguna Grill.  I mention this because they have the neatest set up of huge aquarium tanks.  The fish swim around and you can watch them while you eat. 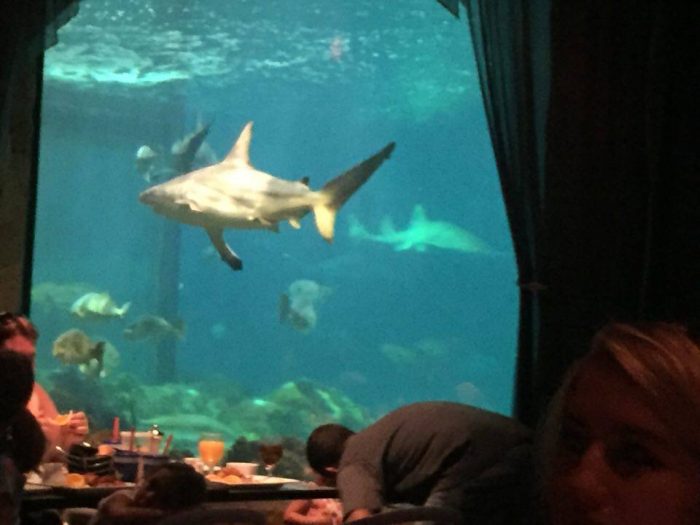 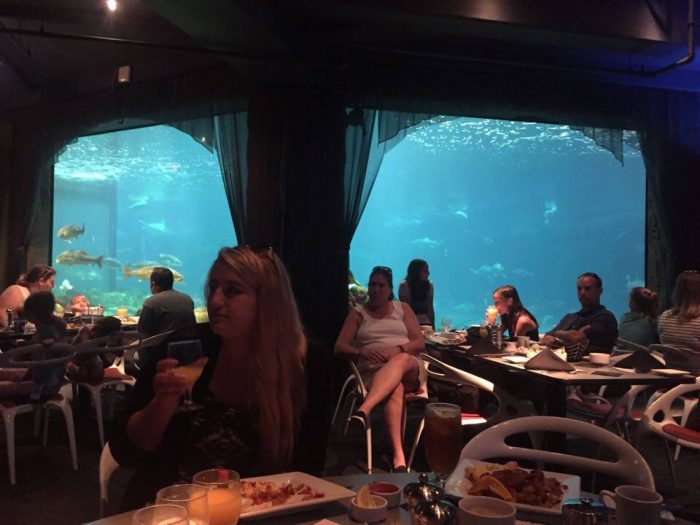 We learned about SeaWorld Partners to End Shark Finning <—-at this link you can download the informational press release. Most of the world knows that the practice of shark finning is cruel and is having an unsustainable impact on shark populations in every ocean. The demand for shark fins drives this inhumane practice where the fins are cut off, while the animal is still alive, and the rest of the shark is thrown back into the ocean to die. 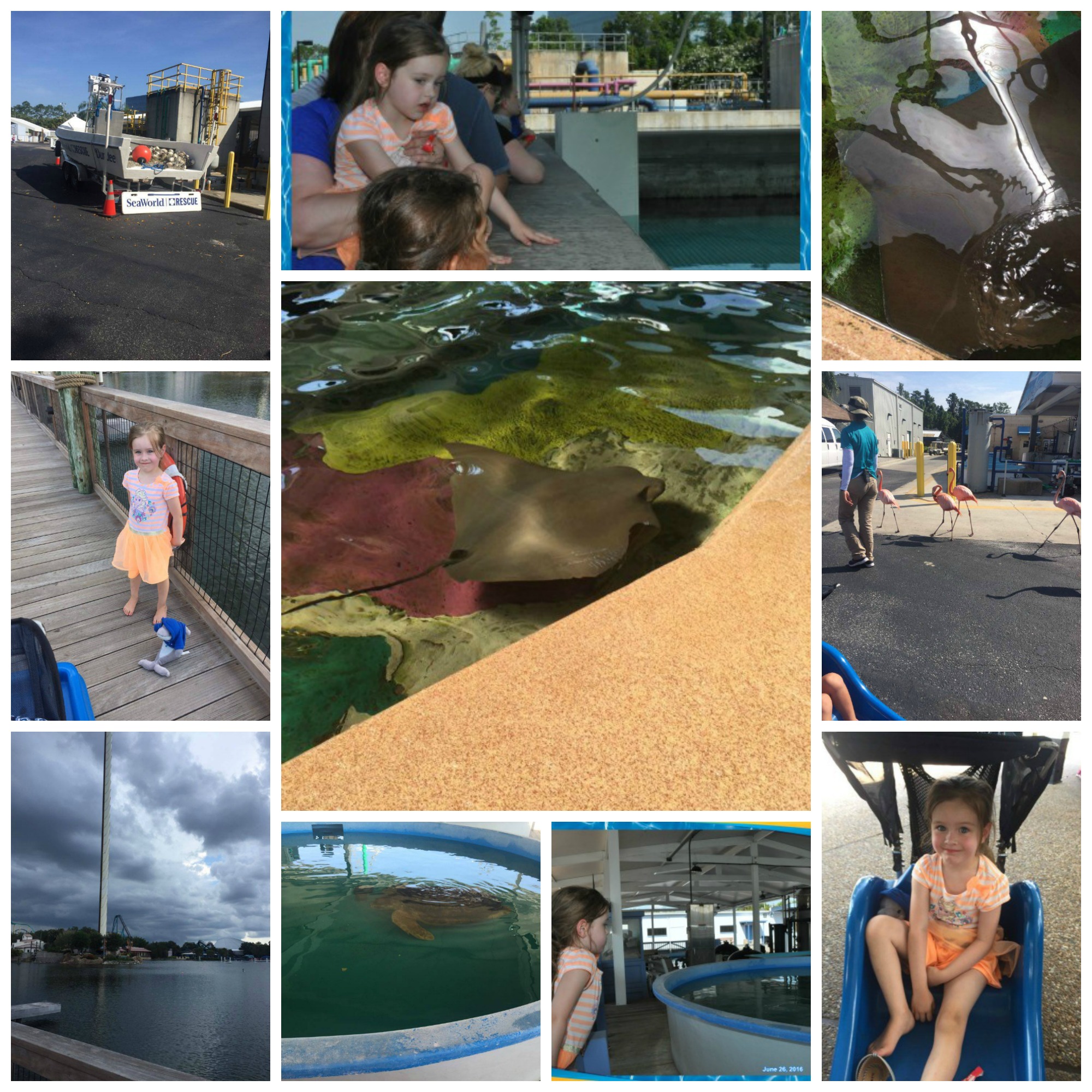 SeaWorld is announcing that the killer whales – or orcas – currently in the company’s care will be the last generation of orcas at SeaWorld.  The company will end all orca breeding as of the date of the following press release which you can download for your reading. SeaWorld Makes Historic Announcements.

SeaWorld Parks & Entertainment (SEA) and world-­renowned marine  artist and conservationist Guy Harvey announced a new partnership focused on  ocean health and the plight of sharks in the wild.  The two organizations will partner to  raise awareness of these important issues, and collaborate on science and research to  increase understanding of how to better protect these critical predators and their habitats. Another informative press release that you can download can be found here-SeaWorld Guy Harvey Partner for Ocean Health. 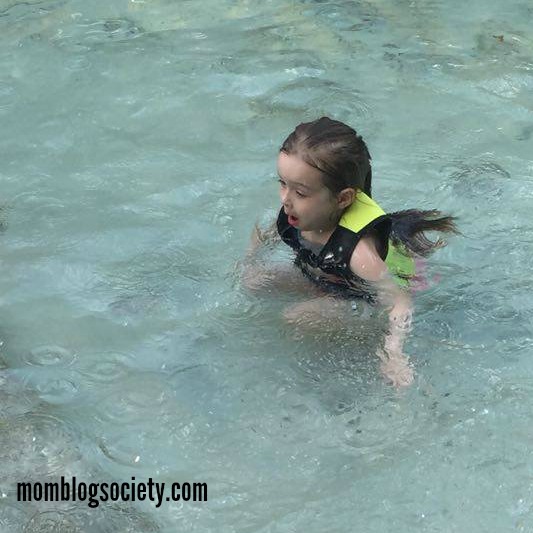 What can you do to help? That was one of my biggest questions.  I want my grandchildren’s children to be able to learn and visit places like SeaWorld, Discovery Cove as well as many other places that take care of these precious animals. Places such as these (especially SeaWorld) have rescue and rehabilitation areas on their property.  They rehabilitate injured turtles, manatees just to name a few.  You can read more about what you can do by downloading this pdf : Ways You Can Help SeaWorld Protect Wild Animals and Wild Places. 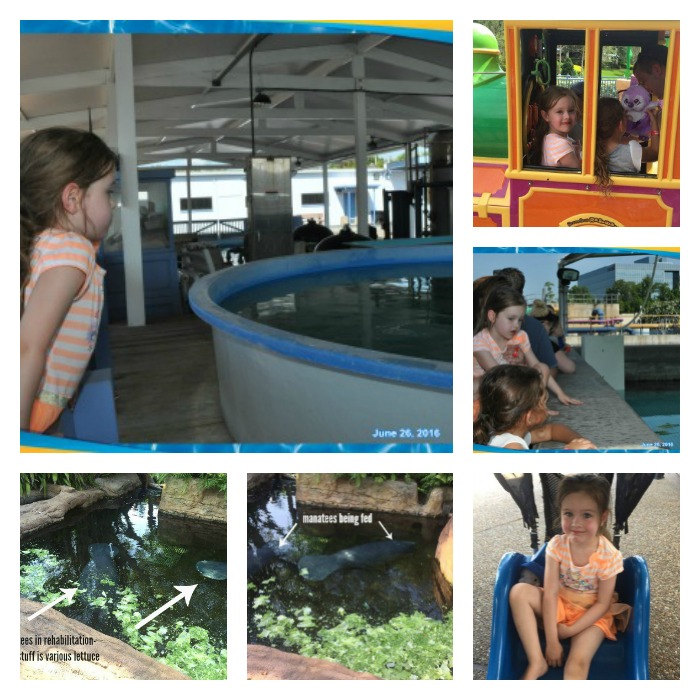 Before we left SeaWorld we enjoyed some downtime walking around the park.  Emma had begged to go on a rollercoaster so we found one that was ‘Emma size’ in Shamu’s Happy Harbor®.  We had so much fun together even though it is not a long ride but perfect for a child her age.

I know this article is a long one and I hope I haven’t forgotten anything ‘important’.  I hope you take time to read the articles I have included in this article so you can grasp a better understanding of how SeaWorld takes care of these animals.  Also their rehabilitation efforts and partnering with other companies to provide an awesome experience for your family and above all the animals.

You can follow Discovery Cove on their social media below:

You can follow SeaWorld in Orlando on their social media below: 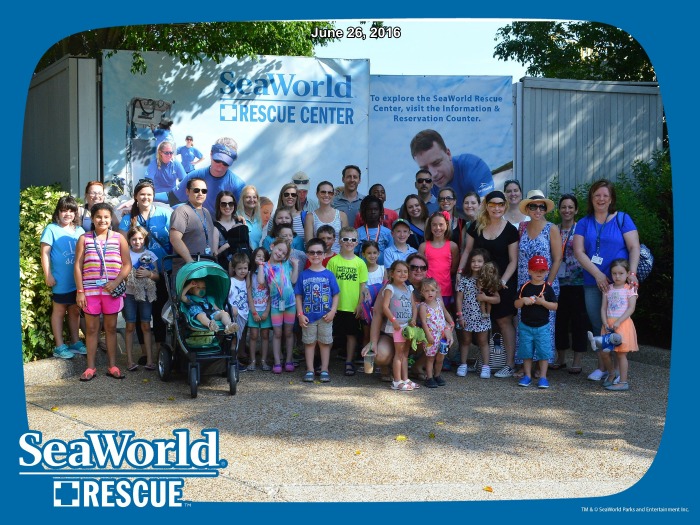