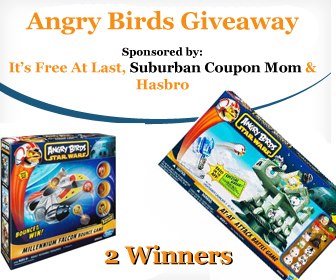 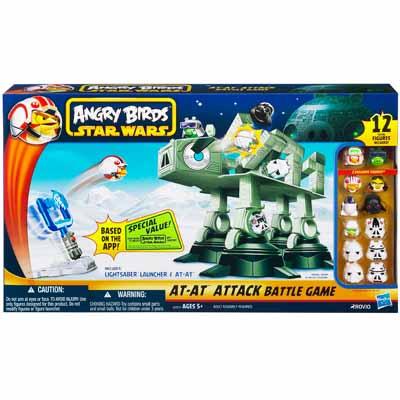 Stack, launch, and destroy with the AT-AT ATTACK BATTLE GAME, which includes 21 blocks to create the signature AT-AT, a LIGHTSABER LAUNCHER and 12 ANGRY BIRDS STAR WARS figures — including two that are exclusive to this set! Players can also unlock ANGRY BIRDS STAR WARS in-app content with a special code in each pack. (Approximate retail price: $39.99; Ages: 5 & up.)

ANGRY BIRDS STAR WARS® MILLENNIUM FALCON BOUNCE GAME
Bounce into action with the new ANGRY BIRDS STAR WARS MILLENNIUM FALCON BOUNCE GAME. Bounce three balls at the MILLENNIUM FALCON to knock down as many enemy pigs as possible, and land in the cockpit to score big! Players can also unlock ANGRY BIRDS STAR WARS in-app content with a special code in each pack. (Approximate retail price: $19.99; Ages: 8 & up; Players: 1-2)
Available at major retailers nationwide and on Hasbro.com.
Thanks to Hasbro, It’s Free At Last & Suburban Coupon Mom, two lucky winners will receive a game of their very own. Simply follow the Rafflecopter form below for your chance to win. Giveaway is open to U.S. Residents, ages 18+ years of age. Good Luck.

Disclosure: I have not been compensated in any way for this post. All opinions and experiences are my own. Open to US, 18+ only. Confirmed Winner(s)will be contacted by email. Winner(s) have 24 hours to respond before a new winner is chosen. No purchase necessary. Void where prohibited by law. The sponsor(s) will be responsible for product shipment to winner(s) of this giveaway. My blog is not responsible for product shipment/delivery. This event is in no way administered, sponsored, or endorsed by, or associated with, Facebook and/or Twitter, Google, Pinterest. This disclosure is done in accordance with the Federal Trade Commission 10 CFR, Part 255 Guides Concerning the Use of Endorsements and Testimonials in Advertising.

I like Scrabble. Thank you so much for this giveaway> My grandsons love Angry Birds!