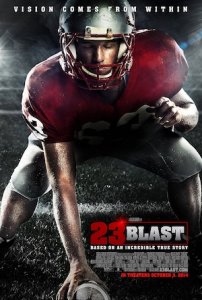 The inspiring true story of a high school football player who becomes blind over night, will hit theaters October 24th!